Life has been a little crazy lately, which is why I couldn't find time to do a proper post, so I waited until today.  Just because it's been nutzo, doesn't mean that I haven't been eating whole foods though!

I've taken pics of some of the things that I've eaten over the past week or so, and I'll post them near the end of this blog.  I also have a recipe or two to share, so that will be later in this blog too!

What I want to chat about first, though, is how things have changed in the past 20 days, and some of the realizations I've come to in the past few days.

* I used to waste a lot of food and money.

I had my budget, which was $80/wk (CAD), the same as it is now for this 100 Days of Real Food.  But I would often "pick something up" or "get a snack" which 90% of the time was NOT a healthy real-food choice.  For the times that those "pick-ups" replaced a meal, that meal worth of food that I'd already purchased went to waste. So not only was I spending more than the $80 I budgeted for food, on things I ate (aka junk), I wasted the food I'd already bought, so not only was that a waste of food (which is a crime), I was wasting the money I'd already spent.  All the good, fresh food would go bad and contribute to the thriving ecosystem in the back of my fridge. 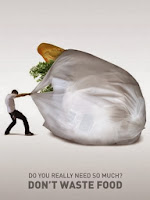 I came to this realization when I saw how much money was left in my bank account at the end of the first week.  Because I'm also not eating out as much (not too many places offer decent meals which are in-line with this plan), I'm suddenly finding myself with more mad money!

*  I rarely/never used to take into account what I had left from the previous week, when making plans for the meals I would (supposedly) make in the following week.

Aka wasting money and food again.  I like to pride myself that I'm doing things in my life to reduce the carbon footprint I have (I recently switched to organic/biodegradable personal products and household cleaners for instance), and yet there I was wasting food.

This week, one of the things I'm planning to make, is fish tacos.  I'd never even heard of fish tacos until a couple of years ago when I was in Columbus Ohio and tried one of them and really liked it!  I've never seen any place here which serves them, so I decided that this week I was going to try making them.  The kind I'd had in Columbus were actually pretty healthy (as far as I knew anyway) so I knew it could be done.  I found a recipe here that I will try today.  I'll have them for either lunch or dinner today, and for lunch tomorrow.

Thing is with this recipe, it only uses about 1/4 of a head of cabbage (I halved the recipe for only 2 servings).  What the heck am I supposed to do with the majority of it?!

Well, after thinking about it, because I could really only eat so much of it when it's fresh, before it went bad (there would be a lot of tooting I think!) I had an inspiration!  What about making home-made sauerkraut?!  I like sauerkraut!  I really enjoy the kind that has flavour as well as sourness.  I also know that fermented food are good for you, and that I don't really have them in my life very often.

Of course, I had no idea how to make sauerkraut!  I wanted to find a recipe online, but it had to be easy, with items and ingredients I have already, or can get really inexpensively.

What I found was this recipe.  It's from a site called The Kitchen.

It seems pretty easy.  There are only 3 ingredients:

I love caraway seeds, but for whatever reason I don't have any (and thought I did!) so I used Ajwain seeds instead.  Yes, I'm aware of the irony of not having caraway seeds, which are pretty common, but having Ajwain seeds, which I had bought because I'd never used them before...  I hope the sauerkraut tastes OK!  The flavour of the Ajwain seeds are different than caraway, but I thought they may work anyway.

I only made it about 2 hours ago, and it is around a week away from being ready to eat, but here is a pic of what I've done so far: 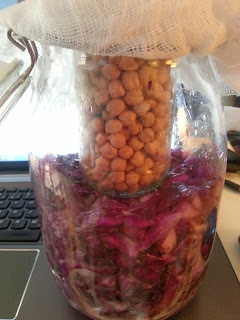 If you go to the site, you will see that the writer recommends using a cleaned stone in a jam jar to hold down the cabbage.  I don't have any rocks just hangin' around my apartment, so I used what I had on hand--some dry chickpeas!!  Hey man, gotta use what you've got, right?

They're in a jar, so I'm hopeful I can still use the chickpeas when the kraut is finished krauting.

One of the things I made in the past week or so is home-made pizza crusts.  I cut the dough ball into 8 equal pieces, which are the right size for a single-sized thin crust pizza.  You can find the recipe I used here.  It's a REALLY easy recipe.  It takes some time, but the hands-on bit is really quite short.  And the dough balls freeze really well too!

As toppings, I used crushed, no-salt-added tomatoes, and added dried herbs.  The cheese is organic mozzarella, and I threw on some veggies.

The great thing about this crust, is that you can add the toppings right on the raw dough, and bake the lot on about 400F, for about 15 minutes, depending on your oven.  How easy can you get? 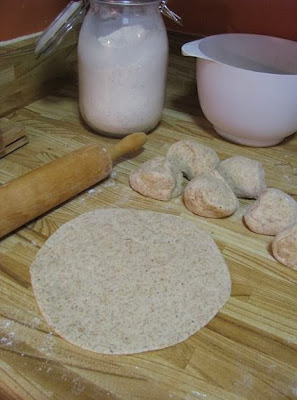 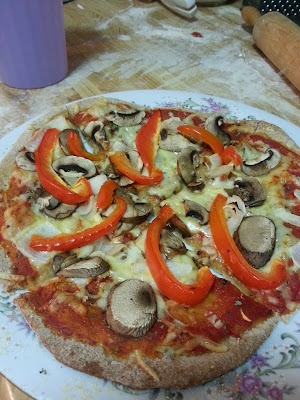 In the last week or so, I've also discovered a fool-proof way to make delicious oven fries, CRISPY delicious oven fries!!  OMG I LOVE fries, and was worried that I'd have a really hard time staying away from either the deep-fried kind, or the oven kind you can buy at the supermarket (which are so NOT a healthy alternative!!).  So, instead of fighting the fry cravings for the next couple of months, I decided to research and experiment.

Here's the recipe.  The fries in the pic are of seasoned ones, but the recipe works just as well for naked fries.

Slice whole potatoes into fry/wedges.  Be sure they're close to the same size (even if it can't be the same shape without waste) so they finish cooking at the same time.

Place tin foil on a baking sheet, and place a cooling rack on top of that.  The cooling rack is key to the recipe--that's why the fries are crispy!

Place raw fries on the cooling rack, being sure to leave enough room that the fries don't touch.
With a pastry brush (you can find cheap ones, I got mine at the dollar store!) brush each fry with some oil.  I like coconut oil, but you can use any real oil, as long as it can handle the heat.

Place tray in the oven.  The fries should take about 45 minutes to cook, but it will depend on how large you make the pieces.  Smaller pieces will take much less time than wedges for example.
Set your timer for 15 minutes.  When the timer goes off, rotate each fry so that another side is facing down, and brush on some more oil.  Don't worry, much of the oil will drip off (that's why there's tinfoil!).  Place back in the oven.

Set your timer again for 15 minutes, and repeat the above, in 15-minute increments, until your fries are done.  **Note if you are making skinny fries, your timer minutes will be less, so please adjust accordingly** 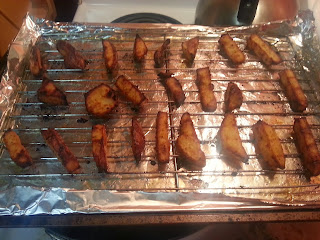 When the fries are finished cooking, dab them with paper towel if you wish (I did because I don't like greasy fries) and enjoy!

Last Tuesday was the first of three Tuesdays where local food trucks were coming to my work.  Normally I'd be all over it, but I was resigned to the fact that there wouldn't be anything I would be willing to eat during this 100 days.  I looked into the trucks just in case, and found that one of the trucks, a Mexican-fusion truck, had a couple of things which would be a good choice, with one small change--I would bring whole wheat wraps, and replace the white wrap in a dish, if everything else is OK. 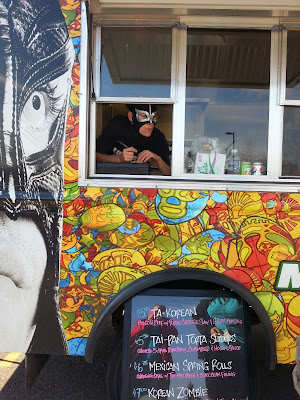 I had this really cool fusion chicken burrito, which I unwrapped, and then re-wrapped in my whole wheat wrap.  I don't have a pic, since I scarfed it down before it occurred to be to take a pic! LOL

One of the other trucks was a British bakery truck with cupcakes and fruit pies, and that was kind of tough to stay away from, but I just got my food, and went back to my office.  Enjoy what I do have, instead of dwelling on any choices that I choose not to indulge in right now, right?

Today is the last day of the 2nd 10-day phase of the 100 Days of Real Food, and things are going pretty darned well.  Yes, there have been challenges, and occasionally I've had to leave the room of something that's calling my name, but in the end it's been worth the effort so far.  The things I like that aren't good for me, honestly I was eating way too many of them.  At the end of this 100 days it's not like I'm never going to have anything unhealthy again, but it won't be like it was.  It will be occasionally, not every day or every other day.

20 days down!  Still going strong!  And pretty proud of myself so far!!