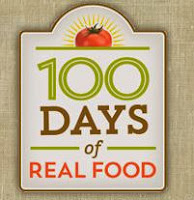 Yesterday marked the three week point for this 100 Days of Real Food!  It also means that I'm nearly at the 1/4 mark!  WOW!  It went so quickly--from this perspective anyway. :)

I've spent the first few weeks of this time settling into the idea of eating only real food, which has been a great idea.  It was nice to ease into the idea (though no easing into the food!) because in this world, it's sometimes difficult to stay away from processed foods etc simply because it's everywhere.  If I'd started with the, "I can't haves" I think I would have dived into a vat of chocolate mint iced cream and never come up for air!  But allowing myself to feel the things I was feeling, whether joy, contentedness or resentment, and knowing that it was all OK, that it was all completely normal and it was all a good thing, really helped me to stick to it.

This past weekend I was thinking about what I wanted for my life, and specifically what I wanted for the food part of my life, moving forward.  As you may know if you've read any of my other posts, I'd like to ultimately lead a plant-based life.  One of the things I want to accomplish during these 100 days is to transition from where I am now, to eating mostly (but not all!) plants.

"Plant-based" is becoming a bit of a buzz-word recently, and with good reason.  There are so many benefits to eating mostly plants, and scientists and health-care professionals are doing a lot of studies on the subject, and coming to a unanimous conclusion that HEY!  They're not only good for you, they're REALLY good for you!!

There are some people who think that being 'plant-based' means having to be vegetarian, or even vegan.  That's OK, they can definitely have their opinions, but the truth is that being plant-based literally means that most of what you eat is plants of some kind--fruit, veggies, nuts, seeds, legumes, chickpeas, lentils, grains, etc.

To ME, it means eating mostly plants.  It means a little bit of meat, though not a lot, and making sure that the meat I do eat is of good quality.  It means also eating some dairy in various forms, though rarely the "low fat" or "fat-free" kind, because it's hard to find those which are not full of chemicals.  They're out there, but they're rare!

To me being clean and plant-based, also means limiting processed foods.  Having them occasionally if I feel like it, but not part of my regular life.  So if I want a chai tea latte one day, and I'm not 100% sure what's in it (though it probably has processed sugar), that's OK, because it's not part of my normal daily eating.

While most everyone was brought up hearing "eat your veggies!", we never knew WHY, and for that matter, what was being served up wasn't really saying "EAT ME!" was it?  The bane of my existence were things like canned green peas.  DIS.  GUS.  TING!!!  Smooshy and grey/brown?!  EEEEEEW.

Because of things like canned pea-shaped THINGS, I grew up thinking that I hated peas.  Loathed
them!  But you know what?  Then I tried fresh peas.  Like I picked it off the vine at a farm, opened the pod, and ate one.  They're sweet!  They're crunchy!  They're chewy!  They're DELISH!

Anyway, long story short, turns out I actually like the majority of fruits and vegetables.  Loathe raw tomatoes with the passion of 1,000 hells, but other than that I'm pretty good.  Well not a fan of green lima beans either, but I haven't eaten them since I was a kid, so who knows, maybe I would like them now.

I didn't come to enjoy them until I learned how to cook them properly.  That's the key.  Over-boiled vegetables and super boring salads just aren't good to anyone are they?

So anyway, that's what I'm up to at this point.  I'm going to increase my plant intake slowly over the next couple of months.  I don't know what my percentage of plants vs not plants will be, but you know what?  It really doesn't matter.  What matters is that I'll be plant-based by the end of January.  And my body will LOVE me for it!

I found this great food pyramid today, which explains what I want my diet to look like by the end of January (or at the very least am very much on the way to achieving).  I love infographic don't you?  I won't be sticking to any percentages, as I mentioned, so the numbers you see won't apply, but the rest gives you a good idea. :)  Lots of veggies on the bottom, followed by lots of fruits.  Then things like beans, seeds, nuts and other healthy fats.  Then any animal products I may eat, then anything else, but only rarely. 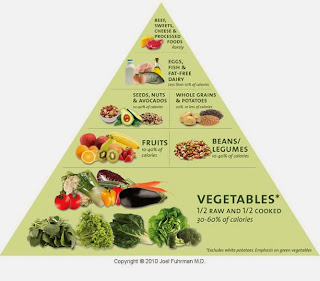 Also for your enjoyment, here is a great video that explains the whys about eating a plant-based diet.  I liked it so I thought I'd share!