Last month my sister and her husband decided they wanted to turn a portion of their backyard into a food garden, and get this--she asked me if I wanted in!

Hello!  Need she ask?!  Grow and then get to eat my own organic veggies and herbs?!  She had be at "food garden"!

It's called Urban Agriculture, and it's a movement which is gaining steam!  Think "The 100-Mile Diet" but much closer to home.  It's "eat locally" at its best.  Fruits, veggies and herbs are at their healthiest, not only when they're local, but when they're just picked.  Not everyone lives somewhere that they can set aside a large area to grow all their own food, and that's fine--we work with what we have!

My sister has a house, and I live in an apartment, but I wanted to grow stuff at my place too.  I don't have any direct sun (which is great for the summer as it keeps my apartment cool, but not so great for growing anything) so what's a girl to do?  Get myself a grow light of course, and grow stuff I know I'll use on their own, and which will go with what we're growing in her garden.  What that means for me, is several kinds of herbs, green onions, and romaine lettuce! 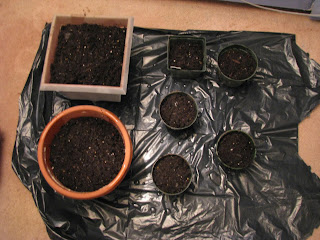 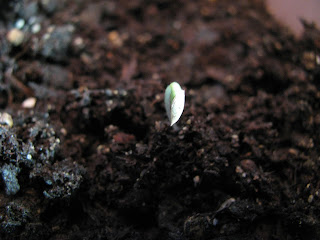 The square pot on the top left contains green onion seeds, and check it out!  My first food baby...the good kind!  Isn't it cute as a button?!  I think I shall call him Oliver.  If Oliver had cheeks I'd squish them he's so cute!

I realize it's the very beginning of March, and nothing can be planted in the outdoor food garden until the end of May, but why should I have to go without?  The packets contain tonnes of seeds--I'm going to get the most out of them!

LOL I just now wondered how many hours my grow bulb should ideally be on per day, and Google'd it...  I ended up on a marijuana website!  OOPS!

OK so there's a lot of info out there (besides the "grow-op" crowd, but they don't necessarily seem to agree, which I suppose makes sense since there are so many products out there...soooooo I'll just figure out what works for Oliver and his friends, once they make an appearance.  We're all different, so why not them right?