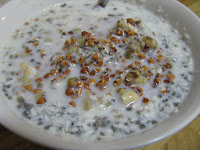 A few months ago I tried Holy Crap cereal for the first time, and was surprised that it tasted so lovely! It was so simple and delicious, and my love affair with buckwheat groats began!

First what I did is create a cold cereal with toasted buckwheat groats--otherwise known as kasha. (I have a friend named Kasha so it's pretty funny for me!).  I combined kasha, apple bits, walnut pieces, cashews, dried coconut, golden raisins, milk and a drizzle of maple syrup.  SO GOOD!

Then last night I was watching a bunch of raw food videos (I'm not a raw foodist, but sometimes their recipes are really delicious, and it's a great way to get in more plants!) and I saw a video of someone making buckwheat porridge.  Yum!  Then I came across a recipe for a raw buckwheat breakfast on Oh She Glows.    It looked DELISH!

I didn't have all the toppings she said she put on it, so I decided to change it just a bit.  Here's the original  recipe, with my additions in red (mine is for one person for two days--so 2 servings): 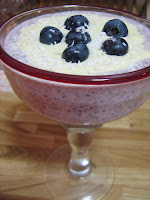 I have kumquats in my fridge, so I made a kumquat cashew cream to drizzle on top.  Just soak cashews in water overnight (while buckwheat is soaking), drain, and then in a blender, combine cashews, water, kumquat, and lemon juice.  If you want to use the cream, but don't have kumquats, that's fine--just use a fruit you have on hand. :)

On top of that, I put blueberries and dried coconut.

You can save any unused portions in the fridge for the next day--it keeps well. :)