As an official Eat Clean Ambassador I was asked a few weeks ago, to do something special for the Season of Giving this December.  To share the love as it were, and spread the joy of eating clean as well.  You can read what other Ambassadors have done this month at toscareno.com!

I wanted to do something different, something special for my co-workers, because it's been a very trying time for us--a couple of months ago, we said goodbye to a friend and co-worker who passed away after fighting cancer for 10 years, and we've had nearly 20% of our workforce lose their jobs.  Morale has been very low, not just because people are worried about what will happen to their own jobs, but because we're having to say goodbye to our friends, and worrying about what it will mean to their futures.

I wanted to do something to bring a little joy into people's lives.  So, I decided to make delicious clean Christmas cookies.  I would make wee packages with 2 cookies in each, a nice festive bow, and attach a customizable "I appreciate you" tag to them, all for just $1 each! (the recipe is below)

The response was so overhwelming, that although I made nearly DOUBLE the packages last Saturday than I had orders for, by the end of the day Monday I had so many orders that not only were all the extras sold out, but I had to turn people away!  I felt bad for that, but the only time I had to make a kajillion cookies was all afternoon and evening on the Saturday!


I had a HUGE pile of wee packages waiting to be delivered, and it really made my heart about three sizes bigger knowing that people still cared so much for each other that they'd be willing to take the time to not only order the cookies, but to write personal notes to each and every one of them.  (there are 80 packages in this pic, believe it or not!) 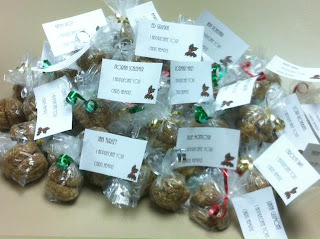 The icing on the cake?  The cookies not only paid for themselves (so it didn't come out of my pocket) but there was actually a decent profit--so I marched it over to our Fundraising department, and earmarked it for cooking lessons for a youth about to move to independence!  I thought that was a cool idea, because I think that a lot of the reason why people in general don't seem to cook very healthily, is because they just weren't taught how to cook properly!  I know I sure wasn't, and 10 years after moving to independence I found myself 75 pounds overweight and no idea how to cook anything healthier.  I sure had a lot of learning in my future!

The original recipe can be seen here.  It was already a pretty clean recipe, but it still included processed white sugar, which isn't healthy at all, and processed brown sugar, which is processed white sugar with molasses spun into it.  I also changed the one egg yoke to one egg white, because I didn't want to waste half an egg to use the yoke (per recipe!) and I had clean egg whites in the carton in the fridge, so I could literally measure out one egg white.  The rest of the ingredients remained the same. 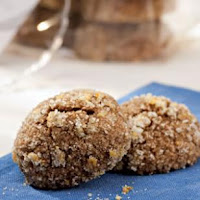 1. Preheat oven to 375. Coat a large baking sheet with cooking spray or line with parchment paper or a baking mat.

2. To prepare the rolling sugar: Pulse ½ cup granulated sugar and 1 tbsp orange zest in food processor until well combined. Place in a shallow dish and set aside.

3. To prepare cookie dough: Grind oats in a blender until they look like fine powder, 1-2 minutes, scraping the sides as needed.

5. Turn the mixer to medium and slowly add the ground oats. Scrape down the bowl; with the mixer on medium, slowly add whole-wheat flour. (The dough will be moderately sticky)

6. Using a slightly rounded tbsp of dough, roll into balls, then roll in the rolling sugar to coat. (If necessary wet your fingertips to help roll without sticking). The zest will make the mixture slightly wet and it will clump; lightly brush off the excess so just a thin layer is on the cookie. Place cookies about 1 inch apart on the prepared baking sheet.

7. Bake the cookies in batches until the edges are set and the tops are cracked, but the centers are still soft and puffy, about 10 minutes.

8. Let the cookies cool on the baking sheet for 8 minutes. Serve warm or cool on the wire rack.

Tip: Make ahead tip: Store in an airtight container for up to 3 days or freeze for up to three months.