Today was the final day of Insanity already!  How INSANE! LOL

Over the past 2 months, I've learned the hard way that the name of the product is apt.  Wholly bloody hell is it hard!!

On the first day, I thought I was going to die.

On the second day I was SURE I was going to die.

On the third day I was sure I HAD died and I was just a zombie going through the motions, biding my time until I could eat fresh brains again.

After the first week, when the leg/arm/shoulder/chest/abs pain eased a little, I started noticing that I could do more already.  Yes, after a little over a week!

The improvements in my ability to do the exercises was insane.  Truly!  Just goes to show how hard the workout is, and how well thought out. 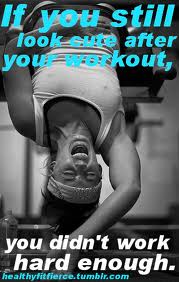 I'd read that month two was WAY harder and I thought,  "Well sure, that makes sense."  I'd also read that some (well many) went back and did month one again, instead of continuing with month two.  At the time I wondered why they would do that, why not at least try to finish it.

When I did the first couple of workouts of month two I understood why.  For me, it was SUCH a huge jump that I found myself virtually unable to do some of the exercises with proper form.  Now I'm no slouch, nor am I new to working out--but I don't think I was ready for month two.  I found myself wondering if it were better to push on and sacrifice my form, or move back to start month one again, and maintain form.

Shaun T has said many times to never sacrifice form, in order to get more reps in, so in the end I (and my workout partner) decided to repeat month one at least once more (probably more than once!) and move on to month two when we thought we were ready.

I found it extremely difficult to commit to 6x per week, particularly on the weekends (Mondays were our off days).  Out of the 18 weekend workouts, I did 2.  Yes, 2.  So that means more than 2 weeks of missed workouts!  Annoying, but I just couldn't seem to fit it in!  It would be the end of the day and I'd be like "CRAP!  I didn't workout!!"

I liked the workouts though.  I never got bored, which is amazing, and started amusing myself once the workouts became more familiar, with watching the people on the screen.  There's "Fall Down Girl" aka "Give Up Girl" who clearly hadn't done Insanity recently, despite being on the DVD.  There's Tonya who is so inspiring for her incredible fitness.  There's "Brother of Give Up Girl" who just about dies a few times, even though he looks like he should be hard-core.  Maybe he had a head cold. ;p

There's The Dancer.  The Triathlete.  And Mr. Wholly Shit Look How He's JUMPING!!

We also amused ourselves my making up names for some of the exercises:  The Captain Morgan.  The Zombie.  Climbing up a cliff face to get away from the zombies, and skiing down the hill again toward the zombies, which we both agreed made no sense at all.  And during one of the suicide drills, where you have to move your feet quickly and touch the ground back and forth, we'd say, "Tippy tippy tippy tippy tippy" for our steps.  Yes, we sound a little crazy, but let's face it...it's Insanity! LOL

We both enjoyed it, so much that I went onto the Insanity FB page and posted, "Is it weird that I actually like getting my ass handed to me everyday?" which made a lot of others laugh. ;p

We're going to do it again, as I said, starting tomorrow.  But this time we're going to make it fit to our schedules, which means 3-5x per week.  Preferably 4-5 but minimum 3.  And since food is SO much of any fitness plan, of course there will be Clean Eating!