The Arnold was SO COOL!  Check out the very bottom of this blog--there's a video!  At about the 2 minute mark, it's about the Robert Kennedy booth--which is partly the Eat Clean Diet team!  Come check us out! 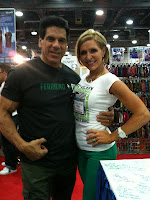 The festival was nuts!!  There were so many people--I heard today that in just one day (the Saturday) there were an estimated 150,000 people who went through the doors.  DUDE!  It took so long to go to the bathroom!  I had to take it on faith that I was heading in the right direction, since all I could see was muscly backs in front of me, muscly chests behind me, and muscly arms to either side!  It was a wall of testosterone!!
To the left is Tosca Reno, Eat Clean Goddess, and Lou Ferrigno (The Incredible Hulk).  Who says you can't be firm and hot, when you are "older"?  What is older anyway?!  I don't plan on ever being "old"!! 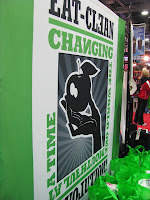 I found myself, when walking around, being so proud that I was wearing Eat Clean Diet merchandise, and that anyone who saw me would know that I was working at that booth.  I felt very honoured to represent Clean Eating as an Ambassador.
One lady I was talking to, was excited for me that I was an Eat Clean Ambassador!  After talking for a moment, she exclaimed with a big smile, "You're an Eat Clean Ambassador!"  I said, "I sure am!" and she replied, "That's so COOL!"  I said, "I KNOW!!!"
A couple was in line to talk to Tosca and get a picture and autograph from her, and I learned that it was actually the (rather buff and handsome) husband who was encouraging his wife to lead a clean eating lifestyle, which was great to hear!  Most of the Eat Clean Diet fans are women I believe, many of whom are trying to get their families on board, so hearing the opposite was really cool!  He apparently even does the cooking!  HOLLA! 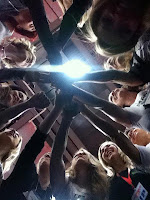 I got to hear so many inspiring stories about how Eating Clean changed and even saved people's lives.  The old adage "you are what you eat" is very true, and I was reminded over and over of that.  I have no idea how many people I spoke to during the three days of the festival, but it was probably hundreds.
Being at The Arnold in turn inspired me to remain committed to eating clean--and to take my health and fitness to the next level.  I'm motivated to feel good and be healthy, especially as I age, but I realized I'm inspired by something else, something which surprised me--I want to make Tosca proud of me.
That was a surprise, because it's not like we hang out or anything.  But for whatever reason, it's important to me that if I ever get asked to be an Ambassador again, I'll be another step further toward being the lean mean clean-eatin' machine I envision for myself!  Yeah baby!!
Eating clean, wholesome food, which builds us up, not tears us down (like the Standard American Diet) is most definitely the way to lead the be the healthiest you can be!  It just makes so much common sense!  No calorie counting!  No measuring teensy grams of this and that.  No being hungry all the time--or ever!  It's about giving your body all the nutrients it needs--and you'll be amazed at how fantastic you feel.  When I first started eating clean, I couldn't believe how I had no idea what feeling good was really like.  That was amazing...and also kind of alarming.  I had no idea how bad I felt, until I didn't feel that way anymore.  Sobering thought.
If you would like to know more about clean eating, I suggest reading The Eat-Clean Diet Recharged.  It's the clean eating bible, and has all the information you need to change your life for the better!  Eating Clean is about changing your life, not just going on some diet, and if you're ready, it's time to make that change!
Posted by Amacuba at 11:37 PM