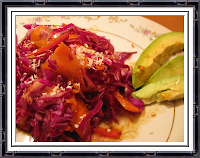 I made a lovely 5-minute salad the other day!  It was shredded purple cabbage, thinly-sliced carrot, green onions finely chopped, sesame seeds, and raw coconut.  I added 1/4 sliced avocado, because it's always a good idea to add a bit of fat to salads.  The dressing was lime juice, honey, chili garlic sauce, a teensy bit of sesame oil, and a bit of soy sauce.  It was DELISH!!  And since I have a food processor, it was likety split! 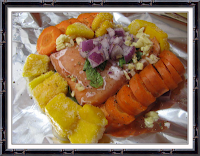 I also tried something new with a salmon fillet I had in the freezer.

I sprinkled it with some lemon juice, honey, salt and pepper, chopped some fresh garlic and red onion, and also chopped some mango and carrots.  Wrapped it in a tin foil pouch (it's called en papilotte if you're fancy), and baked it on 350F until it was cooked, and it was really good!


I've been eating very clean (though of course not sacrificing an iota of flavour) and exercising hard, to prepare for my appearance at The Arnold Sports Festival the first weekend in March--a mere 5 days away!  I want to make sure that I'm not at all puffy, from eating foods that make me poof up, like too much sodium, processed sugar, and bread.  I try to stay away from processed sugar anyway (it's SO unbelievably bad for you!), but I tend to retain water when I eat too much sodium, and too much bread makes me look like I've been soaked in an egg/milk mixture, and am ready for cooking in a griddle! lol  There is nothing wrong with bread of course, provided it's made with whole ingredients that actually nourish the body, but since it make me poofy, I've only been having it once a day at most, and generally in the morning, when my body likes to have grains.

The benefit of having done it for the past 9 days, is that I HAVE been de-poofing, despite having my "monthly", which is freaking fantastic!
I think another reason I'm deflating, is that I dusted off my juicer.  I haven't used it much since the summer, when I LOVE juicing all the super-fresh veggies and fruits.  It's a great way to get in another few servings though, so out it came.  Today I made carrot, apple and ginger juice.  Oh my GOODNESS was it good!  It was a little bit sweet (I put in more carrot than apple), had a bit of a bite from the fresh ginger, and it was very smooth and silky-tasting mouthfeel, which was rally pleasing.
That was a chef term--mouthfeel--are you impressed? ; )

Actually en papilotte is also a chef term, so you SHOULD be impressed!
Posted by Amacuba at 10:33 PM