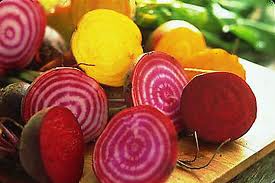 When attending The Arnold this past weekend, I re-discovered my love for cooked beets (I've been juicing them for a few months, which I also LOVE), and also discovered a way that I actually LIKE Brussels sprouts!  Amazing!!

The salad tastes best when eaten right away--thankfully, even though it takes an hour to make, most of the time it's not hands-on, so it is still an easy meal to make.

1) Pecan glaze--combine honey, sea salt, and cinnamon in a microwave-safe container. Heat until honey is liquid (just a few seconds), and set aside.

2) Heat oven to 375F. On a foil-lined baking sheet, arrange beets. Spray with a bit of olive oil, sea salt and pepper, and dot with half of the crushed garlic. Bake for about 30 minutes (depending on the size of the pieces) until they're half-way done.

3) Arrange Brussels sprouts cut-side down, spray with a bit of EC cooking spray, dot with remaining crushed garlic, and return the baking sheet to the oven. Cook until beets and sprouts are cooked--they will be soft, but with a tiny bit of resistance. Remove sprouts and beets from the oven, and arrange on a plate. Turn the oven down to 300F.

4) Re-warm the honey until it's runny again (just a few seconds) and mix together with pecans, until all pecans are covered thoroughly.

5) On another piece of foil (re-use the same one if you can), on the baking sheet, arrange the pecans in a single layer, and put in oven.

6) DON'T LEAVE THE KITCHEN! They will not take long to bake, and you don't want them to burn.

7) After about 1 minute, stir the nuts, and return them to the oven. Repeat often, until the nuts are roasted. Allow to cool for a few minutes, then unstick them. They should come up easier as they cool and the honey hardens.

8) Sprinkle beets and Brussels sprouts with crumbled blue (or goat) cheese, and nuts.

Purchase small beets, as they are tastier, and you don't have to peel them. Much of the honey will end up on the foil, so don't worry that the sugar content will be too high. You can sub maple syrup if you prefer too. You may add a bit of chili powder to the honey mixture, if you like a bit of zip. Add some sort of grain, to make this a complete meal.

Yield: 1 meal. Can be multiplied as many times as needed.

Cooking Time: About 1 hour (most is hands-off)
Posted by Amacuba at 1:41 PM