So, I hate tomatoes with the passion of 1,000 hells.  Really, really truly.

But sometimes a recipe calls for sun-dried tomatoes, and it can't really be made without them.  If they have enough flavour, I'm OK to add them to the recipe, but it's kind of a crap shoot on if they're too tomato-y for me to handle.  Especially when they're raw, which is how sun-dried tomatoes are.

It occurred to me a couple of weeks ago, that I could easily make them with Arthur (my Excalibur dehydrator), and control the flavour.  And it would be cheaper, as I'd get more, and more convenient, since every other time I need them, it seems they've falled into some sort of alternate dimension because they're nowhere to be found! 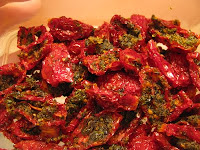 Anyway, I bought a pack of organic grape tomatoes, and marinated them for 24 hours in cold-pressed olive oil, garlic, onion, and basil.  I didn't add any sea salt because it wasn't like I was going to snack on them, and I'd rather add salt to the dish, if need be.
I set them dehydrating at 105F for about 36 hours, checking on their progress periodically, poking at them like a hen watching her eggs.
When they were sufficiently dry, then turned out like this!

And I tried one!

And didn't spew!  They were actually tasty (for tomatoes)!!  My sun-dried tomato babies turned out!  I'm so proud!!
Posted by Amacuba at 7:53 PM