Last weekend I went to the Can Fit Pro Conference and Trade Show in Toronto, Ontario.

I'd been asked to be an Eat Clean Ambassador by staff at Robert Kennedy Publishing, the producers of, among other things, Oxygen Magazine and Clean Eating Magazine! 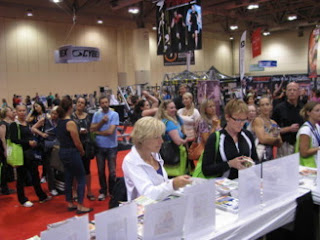 It was insane but in a totally cool and fun way!  I found out after it was done, that we were by far the busiest booth.  It doesn't surprise me in the least--Clean Eating ROCKS!
The pic to the left was taken during a very rare lull.  There were only a few people around the booth, and see all the others in the background?  They're lined up to see Tosca Reno, the face of Eating Clean.  She had a LOT of fans!

I decided to go to Toronto the day before, because they needed me to be ready to go by 830am.  I don't live in Toronto, and the idea of having to leave home at 6am, and then be "on" for nine hours straight was strangely not very enticing!  So I decided to stay at the Royal York Hotel, because it's not much more money than other places downtown (and less than some!), and it was only a 5 minute walk to the convention centre. 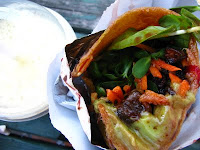 I knew that I didn't want to end my super squeaky clean month early, so I had looked online last week at what might be around as far as food and restaurants, and found that in St. Lawrence Market, there is a raw raw food vendor!  So that's where I went for my dinner!

It was a burrito filled with raw chili, avocado, and assorted veggies and sprouts.  I also got a fruit smoothie.  YUM!

I also picked up some fruit and veg for the convention.  BUT it was so busy, I barely even realized that time was passing, and only took one 15 minute break in 10 hours!

I was OK though, 'cause I had a really great and very filling breakfast of steel cut oats with cinnamon compote, and a fresh fruit smoothie.  It had me going for hours!  Gotta love healthy, nutritious breakfasts!

My challenge to myself, to be very clean eating (both raw and cooked) for the month of August has been going very well.  Not one morsel of chocolate, not one bit of sugar has passed my lips!  I no longer take any sort of sweet in my tea, even agave.  I was very surprised that I could easily switch to tea with just skim milk.  Who would have thought it, back in my 4x4 xlg tea days?  Not me, for sure!  I still marvel at it.  Truly.

I've also been marvelling at the fact that it's been MUCH easier than I would ever have thought to not only stay away from sugar, but from the saturated fats that I always crave if I don't have sugar.  And the idea that giving up both for this month would be actually easier, has definitely paid off.  Who would have thought?!

That's not to say that it's all been raw food and roses.  There have been days where it was more difficult to say no--today was one of those days.  I SO wanted some sort of cake--cupcake, slice of cake, didn't care, so long as it also had icing.  Of course I said no.  Thankfully there wasn't any cake around, otherwise it may have been MUCH more difficult, but I didn't try to placate myself with what was available.  I knew that the chocolate bars at my office weren't what I wanted, so there was no point in eating one, especially since I'd be breaking my squeak!

I'm definitely not a breakfast sandwich person.  In fact, I would NEVER have bought one at any point, if I hadn't been told to try one.  I was leery...they're so often just plain NASTY LOOKING.  But I did...and they rock, unfortunately.  I luuurve them, which is very strange since they're just not my thing!  ACH well, what can ya do.  No sense crying about it now...  mmmm....   STOP THAT!!!