Today and yesterday were about experimenting!  Yay!  Crap! lol
I made raw sweetbread.  Yum!  I also made raw sweet flax crackers.  No idea what they tasted like, 'cause they stuck to the wax paper I was using like glue.  I would have had to eat the paper.  I don't think that wax paper is raw, is it?
Tonight I made raw soup!

From "The Complete Book of Raw Food" which I think I just may buy: 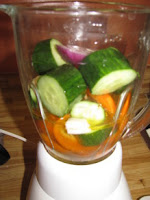 Creamy Bell Pepper Soup
Makes 8 cups. It says prep is 20 minutes, but I'm not sure where they get that from...it took me like 3 minutes. I made a half-sized batch.

2 medium cloves garlic
3 cups water
(I only chopped the veg so far as to make them smaller for the blender. I figure they're all pretty soft, so I didn't bother to chop them much.)

Combine all the ingredients in a high-speed blender and blend until creamy and smooth.
It's like a smoothie!!
I'm finding that I'm having a hard time letting go of junk food.  I wonder if it's an "internal" ie mental/emotional, rather than physical.  I can take or leave junk, but for some reason I still have it.  Weird huh?
A friend of mine, who is a beginner raw foodie, is going through the emotional side of things since going raw.  Apparently it's common--when the body purges/detoxes, so do the emotions, which I find interesting.

Tomorrow will be my first 100% raw day.  I'm having raw "oatmeal", aka 1 tbsp flax seeds soaked overnight, and blend with a whole apple, a bit of almond milk, and cinnamon.  I'll add some flax meal too, and some nuts, 'cause I like it!  I'll be having 3 smoothies during the work day, chock full of goodness, and the soup I just told you about.  Dinner I think will probably be raw nori rolls, since I have a 1/2 avocado which needs to be used up.