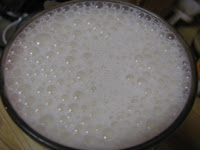 Today I started the day with a breakfast of both raw and cooked items.  My boyfriend took me to breakfast, you see, so I wasn't going to pass that up!!

I was quite full from the breakfast, so I didn't eat again until about mid-afternoon, when I enjoyed something new--a lovely Fuji apple, and some sunflower butter!  I've never experienced sunflower butter before.  Almond, peanut, yes, but sunflower is something completely new.  I liked it--it's more mild than almond and peanut butters are, and also has it's own special taste.  I quite enjoyed it, and it wasn't expensive at all.

Today is a day full of new things!  I also made a few other things:

Raw almond milk!  It looked super-easy when I saw Karen Knowler do it a few weeks ago.  I bought a new blender today for an absolute steal, since my Magic Bullet is just about kaput.  It was SO EASY!!  1 part raw almonds to 3 parts water.  Whiz in blender.  Strain with cheese cloth, or fancy nut milk bag.  That's IT!!
It's crazy--it tastes totally different than the kind you buy in the tetra-packs.  Why?  I have no idea!  But I'm definitely a convert!
Mung bean sprouts!  I'm totally doing it all by myself, and it's easy.  I have no idea what they'll taste like, but they're sprouting like crazy, and will probably be ready for eating tomorrow already!  And they're already so pretty too!

After making almond milk, I had a cup worth of almond meal left over, so I also made Almond Cinnamon Bread from The Complete Book of Raw Food which I've borrowed from the library.  It has a while yet until it's done, but I nibbled a bit of the edge and it's really good!  Here's the recipe for anyone who might be interested:
Almond Cinnamon Bread
(I only had 1 cup almond pulp, so I adjusted the below recipe)

Mix the almond pulp and flaxseed meal together by hand in a large mixing bowl.  Add the oil, date paste or other sweetener, cinnamon, raisins or currants, and sea salt, and mix well with your hands.

Press onto a dehydrator tray lined with a Teflex sheet (I used was paper this time).  The dough should be about 1/4-inch thick.  Use your hands to smooth it flat.  Flip the bread using another dehydrator tray, and remove the sheet.  Dehydrate at 105F for about 4 hours (mine is "on" or "off" so I had to keep an eye on it).  Store in the fridge for up to a week, or freeze and remove pieces of bread as needed.

Raw Day Four is almost done, but I'm really liking it so far!  Can't wait!
Posted by Amacuba at 7:16 PM