WOW, OK so it's been a long time since I blogged!

Here's a quick update on what's been happening lately.

For the new year, I, like many, decided that things needed to change.  The thing to start the changes (and there will be many over this year), is to start with LIVING the person I always wanted to be, rather than DREAMING of being that person.

I had a little moment as 2014 ended, saying goodbye to the old me, thanking her for what she's done for me, and releasing her.  It sounds kind of corny, I know, but I really felt that I was releasing a part of me that had been holding me back in a lot of ways, and releasing her was also releasing a lot of old wounds and other hurts.

January 1st-9th, I started easing back into being more active, walking a little more, eating a little better.

January 10th-16th, I was in Jamaica, at an all-inclusive.  Now, you may well be thinking, "DUN DUN DUUUUUUN", but you see, I had a PLAN.  Failing to plan is planning to fail as they say!

I wanted to have a good time, soak up some rays, and not worry about what I was doing, BUT I also didn't want to come back home resenting myself for going bat-shit crazy. 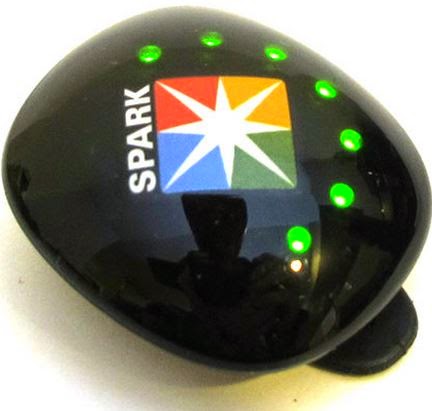 So, my plan was to wear my Spark Activity Tracker each day, which shows me through lights, how
close I am to my goal of walking 10,000 steps per day.  And of course walk those steps!

I also planned to have drinks, but decided to only have alcohol when I was eating, and only eat 3x per day, unless I was starving.  That's still plenty of opportunities!

In addition to that, I decided that I would eat fresh fruit with as many meals as possible, at least a salad-plate amount.  That would allow me to eat lots of fresh fruit, which is amazing in January, and also fill me enough that I may not want dessert.  Win-win!

At the end of my vacation, when I got home, I sync'd my tracker up to Sparkpeople, and lo and behold, I'd walked 68,000+ steps during that week.  Insane!  And I didn't gain an ounce.  Also amazing!

Rejuvenated by my vacation, and with a wildfire in me from my steps success, I decided to make up a plan for 2015.  I also committed to join the Reach 4 Raw Marathon Fun Run, and walk a half marathon on October 25th.  How's that for motivation to keep going?!

My plan to train for walking a half-marathon (for the second time!) is laid out in 3-week increments until April 4th, then in 2 week increments since I'm following a marathon training program for walkers, and since I have time, I'm doing each week for 2 weeks, thus getting even more prepared.

It's a bit of a challenge to get the steps in each day, since it's the middle of winter and very cold, which makes indoor walking desirable.  Very desirable!!  But I'm doing it, come hell or 10 feet of snow.  I want my experience walking the half marathon to be an enjoyable challenge, not full of pain and anguish. :)

On the food side (this IS a food blog!), things are going well.  I'm learning that I don't have to be 100% clean, that in fact it doesn't work for me at all, because then I start thinking in terms of what I can't eat/drink, instead of what I can, and I fall off the rails.  Now, my aim is to eat well most of the time, work on eating lots of fruit and veg, juicing, and just not worrying about it if I eat or drink something a little unhealthy occasionally.  It's about what I can do long-term, not short-term.

I've been trying new recipes, including an AMAZING, authentic jerk-chicken recipe, which I will share soon.  Delish!!