About a month ago, I started brewing my own kombucha.  I was never a huge drinker of it, partly because of the cost, but I had heard a lot of really great things about it, and wanted to check it out for myself.

Things started out small, owing to the fact that I started from scratch by not purchasing the "scoby" but growing them myself.  (Type in "how to brew kombucha" on Youtube, and you'll get lots of videos on the subject).  As time went on, and I had more scobies to work with, my volume of brew...grew!

Stuff for growing the first two scobies (there's organic white sugar there too, just not in the pic): 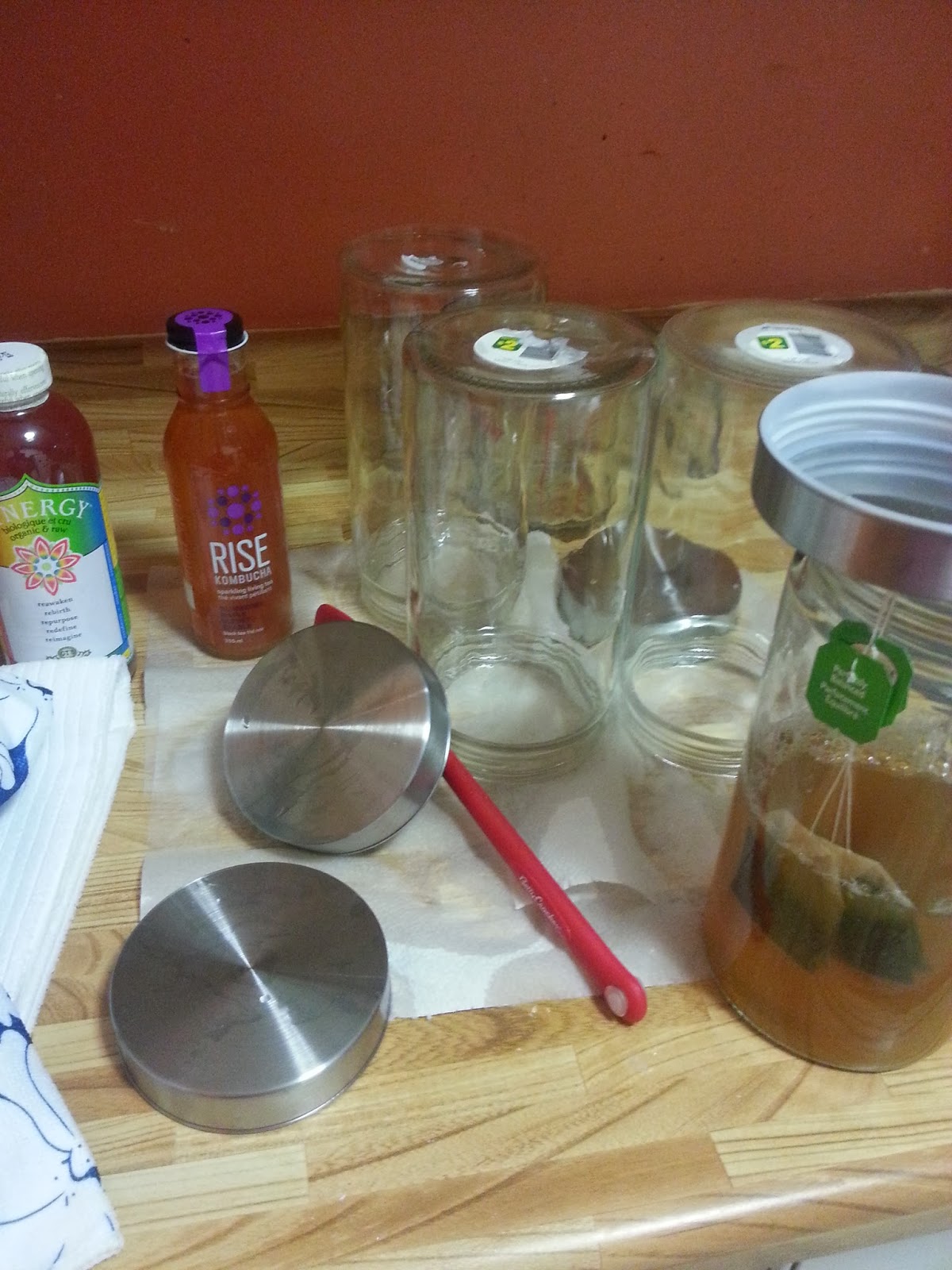 A batch with a couple of toddler scobies doing there thing.  I use all organic ingredients: 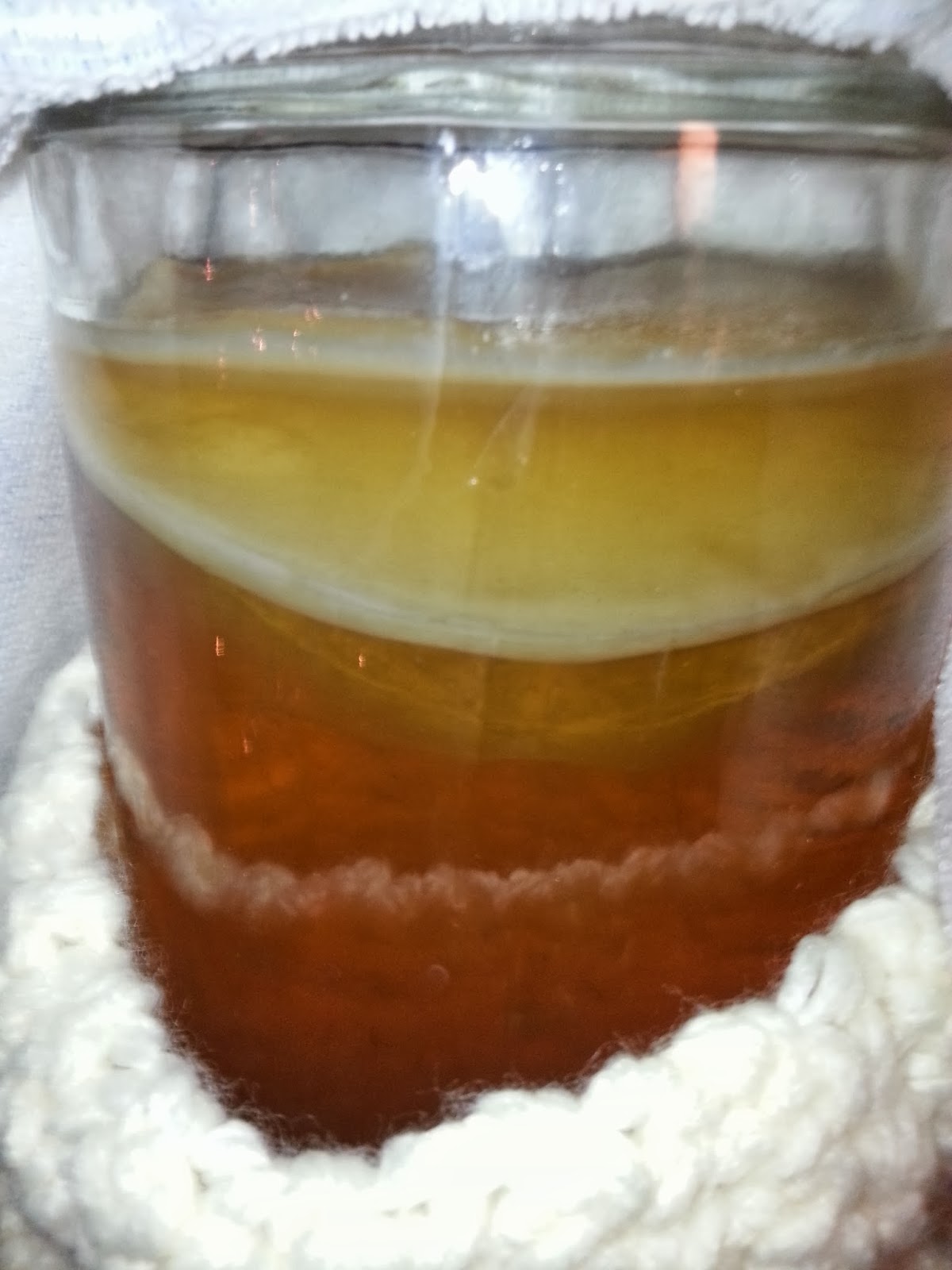 The brew is expanding! 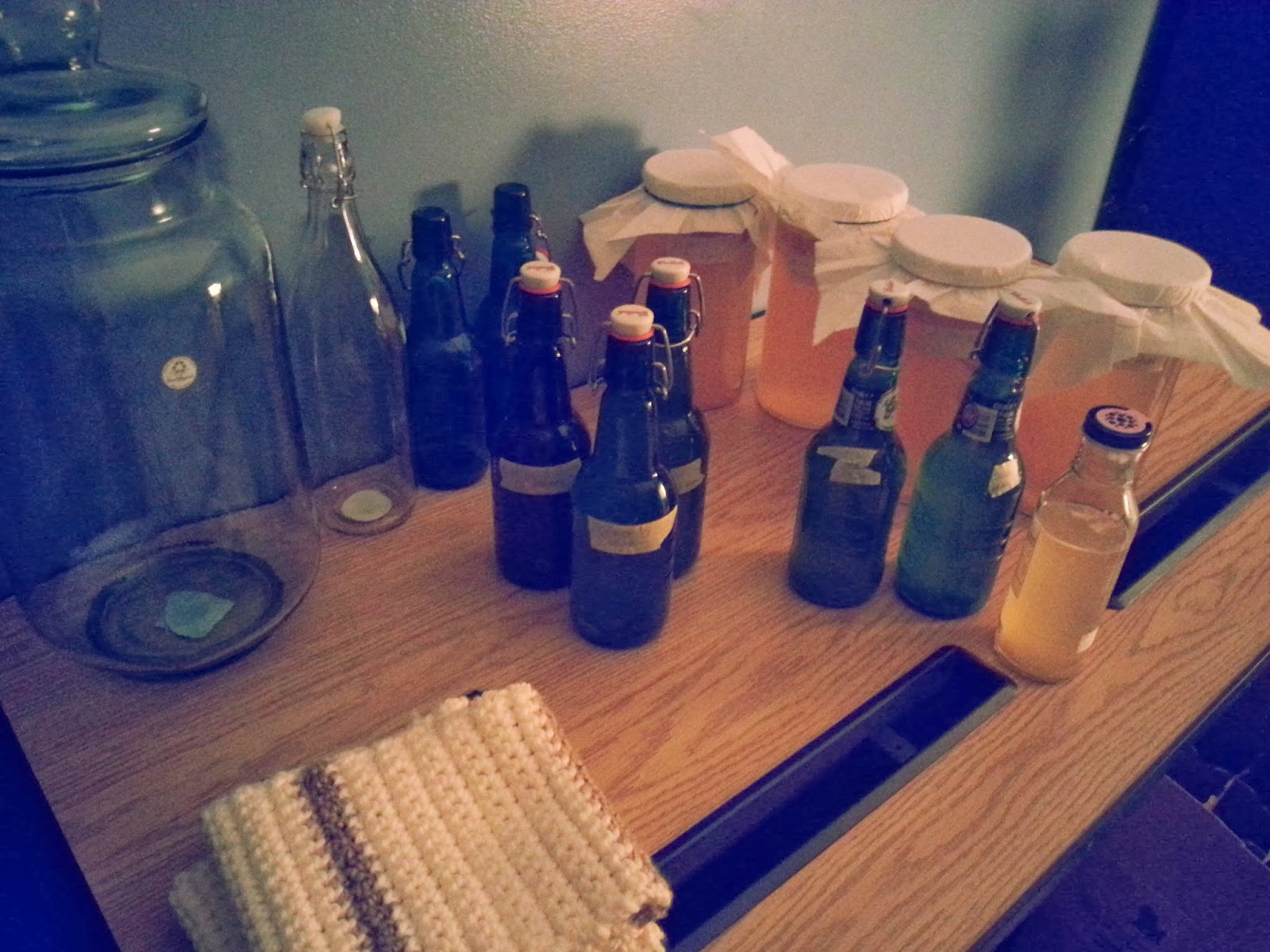 And two pics from today.  On top, two large bottles on their second brew--the one on the left was made today, and is peach, and the one on the right is blueberry, which I started drinking today; and the pic below that is my brew area.  I drank half or so of the blueberry bottle so put the other half into one of the green Grolsch bottles (you can see it in the right hand pic--there are three toward the front of the desk, and the blueberry is the darker one).  Empty bottles at the back.  The jars with "sweaters" on them are smaller batches of kombucha brewing (it's winter here), and the large jar to the left is what I hope will turn into a "continuous brew".  I didn't want to spent a lot of money on an "official" jar, so tried this one instead--it was $17! 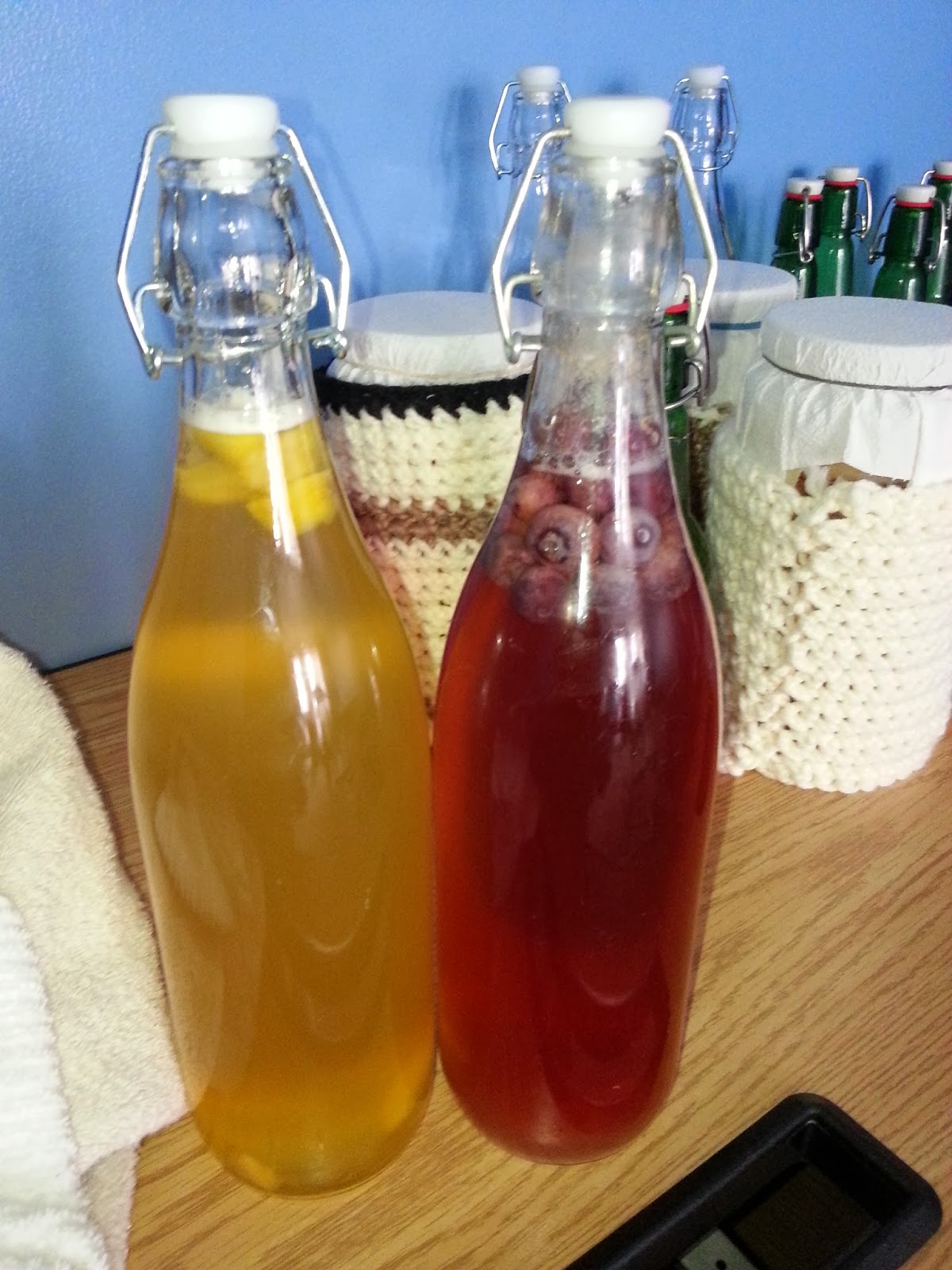 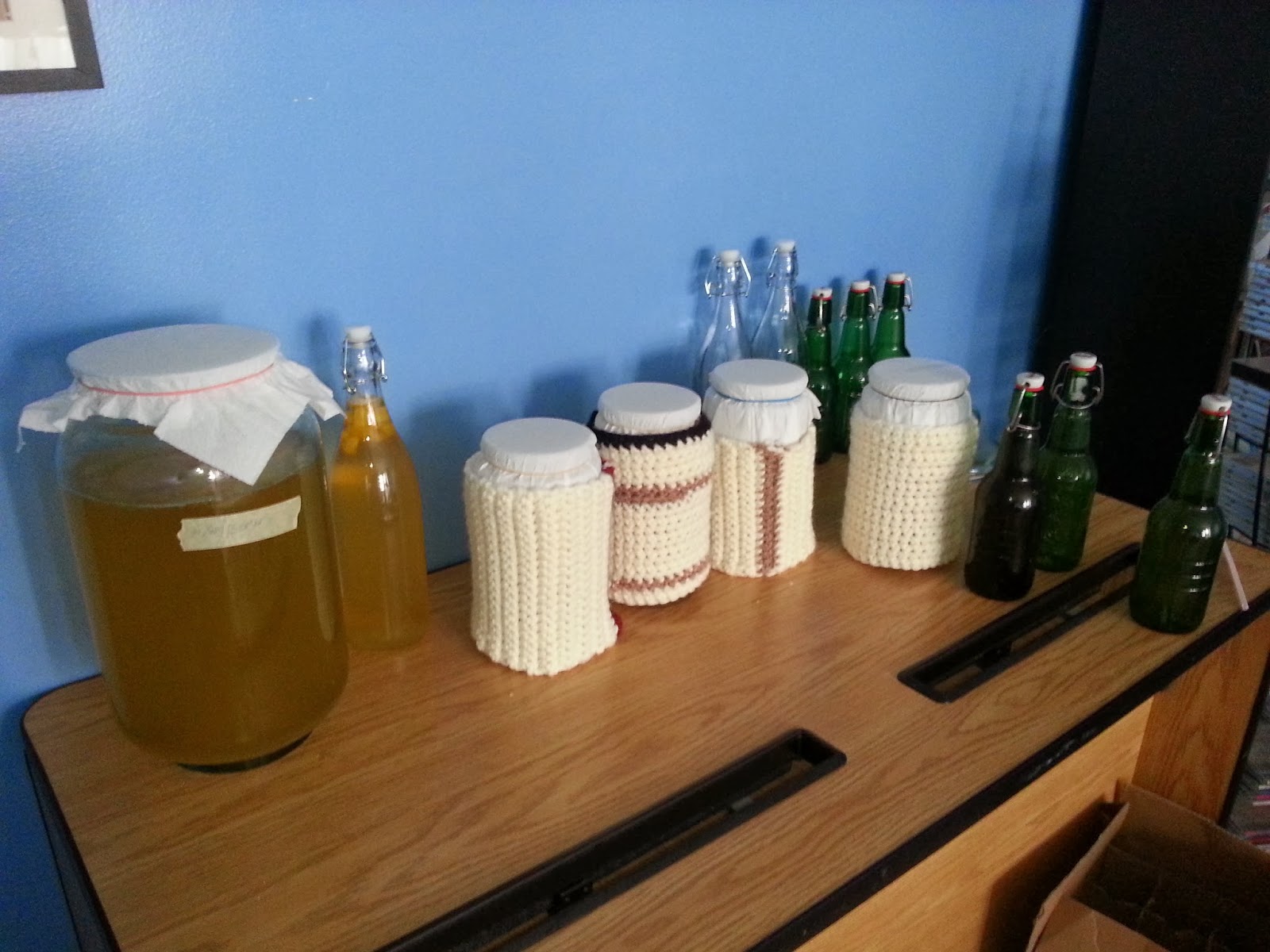 So have I felt any benefits since starting to drink kombucha everyday a month ago?  You betcha!!!

Two things actually.  One, I can now breathe through both nostrils.  I didn't even realize this was an issue, until I suddenly had access to tonnes of Oxygen!  HAHA!  The other has had a profound effect on my life--after 40 years of pretty maddening sleep issues, I have fallen asleep all but 3 nights with no problem.  I have never in my LIFE had this much success with falling asleep.  It's ASTOUNDING I tell you!

Given the fact that each serving, despite being made with organic ingredients, is just a few cents per serving, and the benefits I'm already feeling, I can see myself brewing kombucha for quite a long time.  I can't wait to see what effect not having processed sugar, AND drinking kombucha on the regular will have on my life!