Good morning!  Happy start of day 7 to me!

Today is a lazy, rainy, chilly, late October day.  Normally, I'd be a bit unhappy about it, since it's the weekend and I'd rather not be stuck inside (I'd much rather be getting some sun!), but today, I'm actually pretty happy with it.  Why in the world would I be happy?  Because today I want to make ravioli from scratch for the very first time, and I would love to make home-made pizza crust too!

The idea behind making pizza dough isn't to use it tonight--I plan on making dough balls and freezing them, to be used in the future.  They freeze and thaw really well, and the crust actually gets its toppings when it's still raw, and then goes into the oven all together for about 15 minutes.  Don't get much fresher than that!  You can read about my first pizza crust adventure, as well as find the recipe, here.

There's a huge benefit to making your own pizza crust, aside from knowing what goes into it--it's WAY cheaper.  The recipe says it makes 2 crusts, but I cut them into single servings, which means 8-10, depending on how thick you like your crust.  I like it thin, so it's around 10 crusts I get out of the recipe.  Unlike many other pizza crusts, it also requires a lot less kneading, which is great for the shoulders!  I highly recommend making it.  Don't be afraid--it's really easy.  Trust me--I'm not baker, and pulled it off. :)  Oh and it stays good in the freezer for a month, and it actually makes nice little individual loaves too, if you find you need to use it up before the month is out.

On another note, I can't believe that I'm on day 7 already!  There have definitely been some challenges, no surprise there, but so far so good I think.  I'm in the beginning of my PMS time (sorry to any guys reading this!) so my "need" for food has risen a little, but by HOPE is that with my not eating junky foods, that I won't be bat-shit-crazy over wanting to eat them constantly!

Before I started this 100 Days of Real Food, I fought very nearly every single day with junk-food cravings.  So far, I'm finding that there are still cravings, but not nearly as many, and other than on Day 4 (which was a toughie), I haven't had as much of a struggle as I thought I would.  It's early going though, so I'm certainly not going to take it for granted that it's going to be smooth-sailing from now on!

My body is already feeling different too.  I feel...more compact if that's the right word.  Less bloated from sugar and excess salt is probably why.  My mood is better, and yesterday when I bought my groceries for the week, I felt downright proud of my cart!  Not judgmental of what others purchased, just really happy for mine. :)  I knew that everything I bought would do my body good, and it was a very nice feeling.

Last week I had $33.10 left over from my weekly budget, which I've safely deposited in my wee tin.  I won't use that, or any other money I have left over, unless I'm in danger of starving to death.  Hopefully that won't happen!! 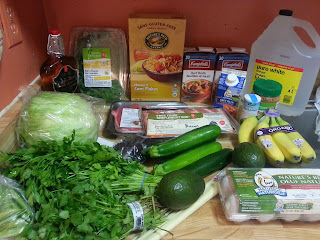 Yesterday was grocery day, and as I thought, I used up much more of my budget than I did last week.  I'm still using what I have in-house, as well as what I purchase for the week, but I ran out of a few necessities and had to buy them again.  I considered waiting, but realized that now is the time to re-fill those things, since soon enough I won't have any pre-100-days food left, and won't really (maybe) have any money to replace them.  Trying to plan ahead!

The iceberg lettuce I got for $1.50 (!!) so I decided to also get some baby arugula.  As I mentioned in a previous post, I want to get excited about salads again, and as Jamie Oliver said in the video I posted the other day, it's all about making the salad interesting.  Arugula has a peppery flavour that I enjoy, so I thought what the heck!

You'll notice that I didn't buy much meat.  Just 1 lb of sirloin and a package of natural bacon.  I don't eat a tonne of meat, not because I have a problem with consuming animal products (provided that the animals were treated well before slaughter) but I know it's much better for us as humans, and for the planet, to eat mostly plants.  Plus my body just is so much happier with mostly plants, including some grains, seeds and nuts, and also a bit of meat. :)  Plus meat is expensive! 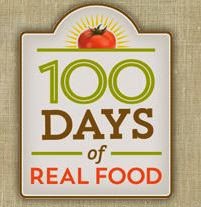