I gotta say, I'm really proud of myself.  SO proud of myself!  It's 7pm on day 10, and after tonight's dinner (bacon and eggs tonight--antibiotic-free eggs, all-natural bacon!) it will be officially 10 completed days.

I'm looking forward to starting my next 10 days tomorrow!  I'm thinking of these 100 Days of Real Food in terms of 10-day groupings--10 of them to be exact.  10 days isn't so long right?  Something we think I can't possibly do for 100 consecutive days, I can do just for 10 (or 1 if necessary!) consecutive days.

The first 10 days have definitely had their difficult moments, some not too bad, some fingernail-hangers.  One of the mistakes I made was not making enough food to get me through the workday.  Let me tell you, it's a LOT harder to say no to junk food (which is available at work) if you're not hungry.  Hungry + craving = very grumpy me!

I've also learned to make sure I have real-food treats to eat, as well as my meals.  Home-made granola, muffins, etc are a really good idea to have around.  Tonight or tomorrow I'm going to make brownies for that exact reason.  Stay tuned for the recipe!

Another thing that's been occurring during the second half of this 10 days is that my body has begun to detox.  For a couple of days the symptoms were things like lots of tinkle breaks, runny nose and coughing.  As of this afternoon, the body blahs and headaches have started.  I've been here before, so I know it's not me getting sick (though it feels like it), and it's really a good thing, but that doesn't mean it's pleasant!  Hopefully it doesn't last too long.

Although I wasn't blogging the past few days, I was still taking pics of some of the things I've been eating, so here they are in no particular order:

I had fruit for breakfast one workday.  I had 2x this fruit, and the stuff in the container is raw almond butter.  The only thing in the ingredients list of the almond butter was almonds. :) 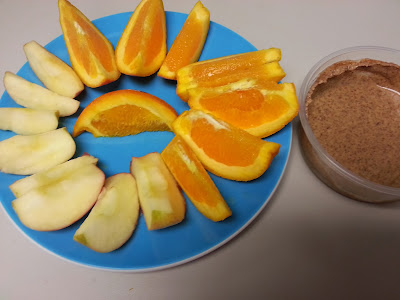 Another weekday breakfast I had home-made waffles.  I made these the previous evening, and just re-toasted them.  The sauce is simply real maple syrup and frozen strawberries, zipped up in a blender.  It was delicious!  It surprised me--I didn't see how I could like anything as much as butter and maple syrup, but this was seriously good! 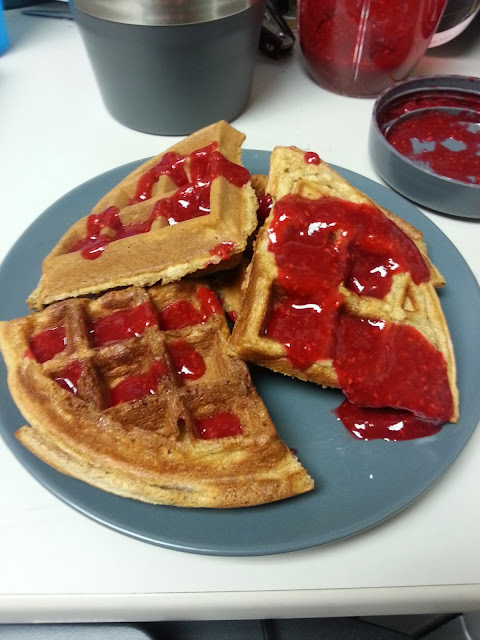 Yesterday, I made a different salad than I've ever made before!  It was SUPER DUPER DUPER easy.  Like a 6-year-old could do it!  It's called Detox Salad, and you can find the recipe on Oh She Glows! a great food blog with lots of amazing vegan recipes.  Even if you're not a vegan (I'm not either) the recipes are definitely worth checking out.

I made half of the recipe in the evening for lunch the next day (and the next--I ate it twice!) and I did as she said, and only added the drizzle of maple syrup the next day.  Unfortunately, the veggies etc in the salad soaked up all the lemon juice, and somehow all the flavour was gone!!  When I make it again (because I will--it's so good!) I'll be adding the lemon juice as well as the maple syrup the following day.  It makes a HUGE difference in flavour. 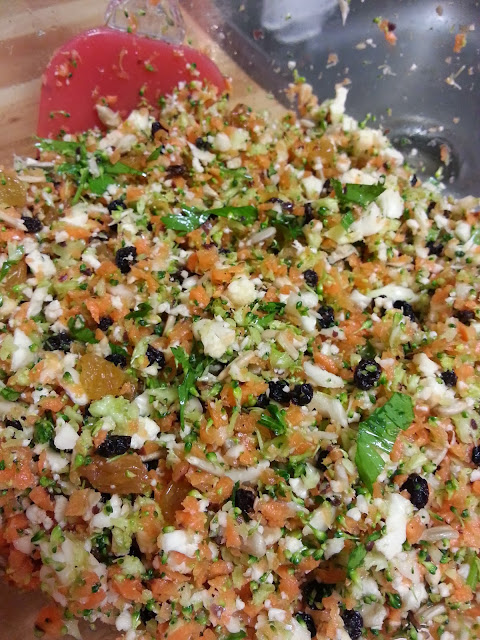 I think during the next 10 days (and probably more than that) I'm going to check out the recipes on Zain Jamal's blog.  She's a fitness model who also clearly knows that good, clean, whole foods don't have to be boring!  Her recipes look un-be-lievable.  I'm SO diving into THAT!

Sorry, I got side-tracked on Zain's blog.

Anyway, tomorrow I think I'm going to take it a little easy on the food front for the day.  I think I'm going to make a sauteed vegetable dish that my sister turned me onto a few months ago for breakfast.  The great thing about the dish is that it can be made the night before, and it re-heats really well, so I'll bring it to eat at work.  I'm also going to make a smoothie for lunch.  Haven't decided what is going to be in it yet, but I'm kind of feeling some kind of spicy banana and coconut concoction.  Or maybe pumpkin pie with real pumpkin...  We'll see!