What an interesting week last week was!

I'd made a commitment to go mostly raw, as you may have read in my previous post.  I wasn't sure how it would go, not because I didn't have a plan to make totally delish raw food, but because I wondered if my mind would go to the "food poverty" place.  Knowing that I wanted to eat mostly raw, which meant not eating a lot of other stuff, may set me off to thinking that I was deprived.


I started on the Saturday (the 17th), after I'd gone to my local farmer's market for the whack and a half of plants I'd need to keep me nourished over the next week.  See the pic to the right of my fridge--it was stuffed in every nook and cranny, and there were also fruits on my kitchen table like apples, bananas, young coconuts and a fresh pineapple. 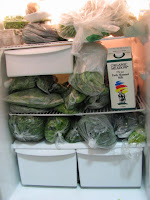 Now, I'm not someone who can eat the same thing over and over.  In fact, I really can only eat a food twice in a row.  Because of that, my mostly raw week required some planning!  Luckily, I've been collecting raw recipes for nearly a year that I've found online, and I also went to the library and checked out two raw cookbooks that I'd liked in the past.  I haven't used the cookbooks yet, but I will for sure.
Green smoothies have always been a big favourite of mine, so I made sure to make at least one big green smoothie last week.  I made a pineapple/young coconut/spinch smoothie and it was absolutely to DIE for.  Young coconuts have such a unique flavour--quite unlike the older coconut that most people are familiar with.  It's a pretty intense flavour actually, and people usually either love it or really don't.  I shared it with the girl that I usually work out with, and I think her life has been changed!  I don't know if she'd ever had a green smoothie before, and to have the heaven-in-a-glass green smoothie that I'd made as her first...well, let's just say she's a very entheusiastic convert! 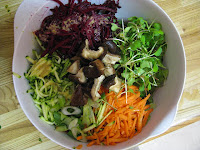 For snacks, I made things like 2 kinds of kale chips (LOVE LOVE LOVE kale chips!), smoothies, apples with almond butter, fruit salads, that kind of thing. 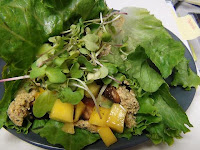 I also made sure to take pictures of some of the things that I'd made over the week that were pretty enough to share!
On the top left, was the first thing I made on that first Saturday--a big shredded salad.  Very quick and easy, with a food processor with the grating blade!
I don't really like raw mushrooms, thought I love cooked mushrooms.  So since I wanted to eat them raw, I sliced and them marinated them in Bragg's soy seasoning and lemon juice, while I was grating and chopping the salad.  I grated zucchini, carrots, and a beet, and thinly sliced fresh green onions.  I added radish sprouts.  Finally, I made a dressing of cold-pressed olive oil, lemon juice, and honey.
WOW!  It was tasty and quite filling!  It must have been all the root vegetables.  That's a lot of fibre! 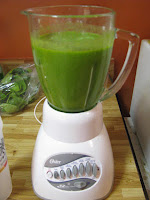 The second image is going to take a bit of imagination on your part! ;)  It's actually a surprisingly tasty raw taco.  The 'meat' is made up of wanuts and spices, courtesy of Dan MacDonald the Liferegenerator.  He's so kooky!  But watching his videos make me crave fruits and veggies, so it's inspiring.

To go with the 'meat', I added slices of fresh avocado, fresh sprouts, and I also made a mango chutney out of cubed mango, lime juice, a tiny bit of sea salt, a bit of fresh chili, and chopped fresh cilantro.  AND I added mushrooms, marinated with the same ingredients as before, but I also added some smoked paprika, because I thought it would be a nice compliment to the nut meat.  I wrapped the whole thing in two lettuce leaves.

It was definitely different than what I would think of a taco, but it was also quite intreguing tasting!  Everything complemented everything else, and I enjoyed it thoroughly.  It was different, but a good different!  I couldn't believe everything in it was a plant.  Seriously--you wouldn't have thought it by the taste and texture!

The third image on the left is the heavenly green smoothie just finished in the blender.  I told you it was big!!  I used one whole young coconut (the water and the flesh), about 1/2 a pineapple (because I needed to use it up), and 2 or 3 big handfuls of spinach.  Spinach has no taste in smoothies, so you can get away with using quite a bit.  It was pretty thick, but oh so good!

A friend of mine and I have also been drinking a green superjuice each day for the past 2 weeks.  It's called Lemon Ginger Blast, from the same Mr. Liferegenerator.  If you watch the video, you'll note that he makes it with habanero peppers.  Now, no freaking way was I going to make it with even a teensy piece of habanero, let alone a whole one!  So, I made it with a small piece of jalapeno in each serving.  Wimpy?  Maybe.  Alive?  YES!! 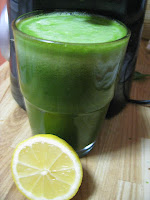 It's been amazing!  I was a bit incredulous that we'd feel a difference, though of couse the juice is nutritious.  But we are!  My friend is noticing that she has a bit more energy, and when she and I were talking yesterday, we realized we both were happy for some reason.  OK that makes us sounds like sour surly individuals, but what I mean is that we were happy just randomly while we were working.  A general overall feeling of happiness.  It was unusual enough that we both took note of it, and compared.  Random feelings of happiness--do you need another reason to try this juice?  We've been drinking just 500ml (about half a quart) each day, so it's not that much.  I'd love to drink about double that, but that would be double the cost, and since this juice is in addition to my regular food, there's a limit.  It's not that expensive, but the cost would double, if I were to double the juice (obviously! lol).
Anyway, I'll be doing it again next week, but this time I got smart!  I decided that I should make juice just once a week, to avoid the constand washing of the juicer.  So I'm going to fill up 10 small water bottles, enough for one bottle per person for each workday, and bring them to work.  I'm going to put them in the freezer, and take them out as needed!  Aren't I smart?!  SO much easier!  I love things that make chores easier!!

On a non food-related note, I've really enjoyed the first week of this raw thing.  So much, I'm going to continue for at least another week!  All new food!  All new experiences!  I'm so excited!!
Posted by Amacuba at 10:15 PM