Late last week, I decided that I would be eating mostly raw this week.  The beautiful weather made me start thinking of the end of winter, and how the growing season would be upon us in the next couple of months.

I've also been feeling a little...stifled I guess...by the winter, and thought it might be nice to give my body a break at least, and eat wonderful light meals, rather than the heavy dishes we usually eat in the winter.  Not that there is anything wrong with healthy stews and the like--they're important in a lot of ways, not the least of which is that they keep our bodies warm--but since it's going to be so nice all next week again, it seemed like a great opportunity for a little spring cleaning!  No, it's not a cleanse--I personally don't believe that anything can be accomplished by an organized cleanse, which can't be done eating clean whole foods--and it's a lot nicer!
Anyway, I needed to be smart about it.  Not only because I want to make sure I have meals planned out for the week, and shop accordingly (which I already do as a matter of course), but I also wanted to make sure that I am getting all the nutrients that I need as well.  Just because I'll be eating mostly raw food, doesn't mean that I'm going to abandon the eat clean way of life.  Some raw foodists just eat whatever, but in my opinion they're not doing their bodies any good.  If you eat half a watermelon for breakfast, some broccoli for lunch, and a salad for dinner, you may not be getting in all the nutrients you need.  For my body at least, I need all my nutrients! : )

Now, you may be thinking, "Wow that sounds so limiting!" but let me tell you, it absolutely is NOT.  The common misconception about raw food is the same as the misconception of clean eating--that it's so limiting.  But as with clean eating, I have the entire world of natural foods as my menu.  The only difference is that the way raw foodists eat the foods is a little different.  Even things like some fish and dairy can be consumed, so long as they're raw.  Sushi-grade raw salmon for example is FANTASTIC!  OMG I LOVE it so much.  SO SO MUCH!  But I only get it when I go out for sushi, because it's so expensive otherwise.  Mmmmm...now I'm craving salmon...

What was I saying?  Oh right--raw food!

Yesterday I had a "normal" clean breakfast, because I needed to go to the farmer's market to get everything that I need for this week.  I didn't want to skip breakfast--that's not part of the eat clean lifestyle, and besides, I get GRUMPY when I'm hungry! 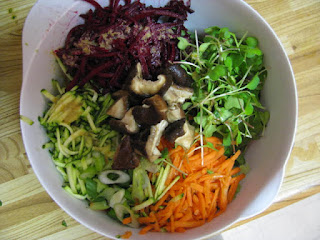 When I got home, I made a FANTASTIC salad.

I'm not someone who likes the taste of raw mushrooms all that much (thought I LOVE cooked mushrooms...go figure).  But, I bought a package of shiitake mushrooms from the Asian supermarket downtown (they're the same price as the regular kind at the grocery store, so HELLO why wouldn't I?), so what I did, was marinate them in Bragg's all purpose soy seasoning (known as Bragg's Liquid Amino's in the US) and lemon juice.

While they were marinating, I grated up a carrot, a zucchini, and a beet.  Then I thinly sliced a fresh green onion.  I put them all together in a bowl, along with some radish sprouts I caved and bought from the health food store I go to.  I'm currently sprouting some seeds I bought from there, but I wanted sprouts for my salad NOW, not in a few days! lol

For the dressing, I combined cold-pressed olive oil, lemon juice, nutritional yeast, and a bit of honey.

It was DEEEELISH!  It smelled amazing even before I put on the dressing, which says a lot about the taste of clean foods.  I should mention that the bowl in the picture is a small mixing bowl, so the salad was quite large!

Another great thing about eating raw food, is that the cleanup is a snap!  You practically just need to rinse things--there's really no time you need to scrub.  A little hot water and soap (hopefully biodegradable) is all that's needed. 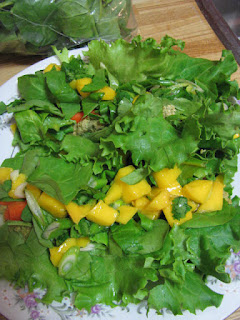 For dinner, I made raw tacos, the recipe I got from YouTube, courtesy of Dan the Man!  It was super easy, though I should have used two lettuce leaves per taco, 'cause they SO didn't stick together.  I made a mango chutney to go with them, with fresh mango chopped up, fresh green onion, a bit of fresh jalapeno pepper, lime juice and a bit of salt.  Seriously yummy.  I know it looks like a big smoosh, but there are two tacos there.

I'm supposed to make them again this week, and I think I'll just make a half-size.  I could only half finish the second taco because it was SO filling!  Who would have thought?!  SO good.  I was really surprised actually--even though I'm committed to this raw week, part of me still doubted that I could actually feel satisfied (hunger-wise) by eating nothing but plants most of the time.  Live and learn!

I made raw almond milk (super easy), then added half an avocado, a few tbsp raw cacao powder, 4 honey dates, about 1 cup sliced frozen strawberries, and some maca powder.  The maca powder is optional--I added it because I had it.

Whir it together, and VOILA!  A big glass of chocolaty-strawberry-y goodness!

I felt AMAZING after drinking it.  In fact I felt amazing for a few hours!  I've found that when I consume something super good for me, my body thanks me by feeling fantastic.  Which is welcome!

Right now, I'm eating a local apple, with almond butter.  The apple/almond butter combo has got to be up there with the best combos--burger and cheese; chocolate and peanut butter; The Captain and Tennille.  About a month ago, I had a friend over for a delicious clean meal.  She asked if there was any dessert, and I said no, but do you want an apple and almond butter?  She looked at me all incredulous.  I said I take it you've never tried it?  She said no...  So I gave her some, and she said, "You've changed my life!!"  HAHA!  Yes, it's that good.

Also currently, I have in my dehydrator raw crackers and bread, which I started earlier this afternoon.  I got the recipe from YouTube again (gotta see how they physically do these recipes--it's so different from cooking).

I had to head out not too long ago because I was totally out of honey (and was shockingly able to find raw honey at the grocery store!).  I should note, to anyone who might want to buy raw honey, that it's very good for grown-ups, but should under no circumstances be given to young children, and NO HONEY WHATSOEVER, even the pasteurized kind, should be given to babies. 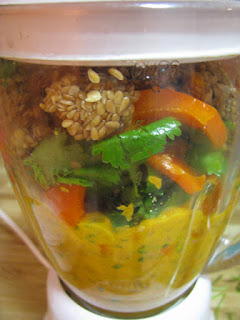 Anyway, when I got back to my apartment, as soon as I walked in the door, it smelled AMAZING!  If the crackers and bread in the dehydrator taste as good as they smell, they're not going to last long!  They're probably not going to be ready for at least 24 hours (particularly the bread, which will likely take longer).  Raw crackers and breads really do take a long time, but the vast majority of the time is hands-off, so all you have to do is remember to make them enough ahead of time.  Also, they will last for about a month if thoroughly dried, and put into an air-tight container, so when you figure the 10 minutes or so I took making them, spread out over a MONTH of eating it, it sure doesn't seem like that much time!
Speaking of the crackers and bread:
In my blender, I put the 2 cups of flax seeds I'd soaked briefly in 2 cups water; 2 orange peppers, a handful of fresh cilantro (love cilantro!) a bit of sea salt, and 2 cloves of garlic.

Originally I was mixing it in the blender, as you see to the right, but (as I should have known) my blender had trouble mixing it.  It's not that the blender is wimpy or anything, it's just that the soaked flax seeds are so very gooey.  So, I switched to my food processor and that was that. 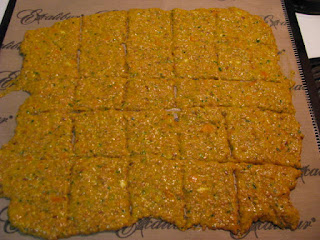 It made 3 entire trays worth, so I decided, since the last bunch was a bit more than the first 2, that I would make it thicker, and call it bread.
I scored the crackers and bread before putting the trays into the dehydrator, so they would be easier to break apart when they're done.  The bread I made into bigger pieces, thinking that I might want to use it as sandwich bread sometime soon.  Perhaps an avocado and sprout sandwich?  Who knows!  I'll have to remember that the bread doesn't need to be super hard, so can come out earlier, but that it will also not last as long, since it won't be super dehydrated.

One of the things that I'm finding I need to get used to, is the idea that I can eat things like crackers, which the majority of the time are terrible for you, without feeling guilty, because raw crackers have nothing unhealthy in them whatsoever.  I wouldn't want to eat an entire tray of flax crackers though, not because of any unhealthiness, but because flax...uh...cleans out your pipes.  As a friend of mine discovered (after me warning her first!) when she took home about a half-batch of raw onion bread I'd made.  I warned her to not eat them all that night, not matter how good they are.  The next morning, she said to me, "I found out why you didn't want me to eat all the onion bread last night."  And I LAAAAAAUGHED my head off.  I warned her!  HAHA!  I mean yeah, it tastes just like onion rings, but you'll end up pretty darned clean if you eat too much!
Posted by Amacuba at 3:03 PM