Over the past few years, I've learned about healthy eating, how to cook healthy foods, and about having a healthy body.

I'd learned to love good, whole, clean foods.  But I never totally embraced it--I always wanted the junk food, and more often than I would like, gave in to it.

Then around this time last year, some challenging things happened, and I found myself on a downward slide with my healthy food, and healthy life.  I still enjoyed good food, but the ratio was changing.  The slide continued, and I found myself immersed in many of my old habits--habits that in the past, had gotten me to the point of being very overweight, and very unhealthy.

Yesterday I came across 100 Days of Real Food, a wonderful blog written by a woman, who along with her family (husband, 2 kids) embraced 100 full days of eating nothing but real food (nothing processed whatsoever, no matter what), not once, but TWICE, and blogged about it all.  They did it twice, because after the first experiment, many people commented that there was no way they could do it on a budget.  They took the challenge, and even asked for a vote as to how much their family of 4 would be allowed to spend each week on groceries.

This idea really spoke to me.  I've been struggling with getting away from processed and "convenience" foods for quite a while now, and I admit the idea is kind of scary.  But the fact that it IS scary is one of the reasons why I considered it.  My immediate thought was, "Oh I can't do that" which is claptrap, and the idea of not consuming anything junky makes me a little panick-y (No pumpkin lattes? No chocolate?), but then I realized that that mindset was actually one of my issues.  It's not that I can't have pumpkin lattes and chocolate.  It's that I have to find ways to enjoy these things, but only when they're made with REAL ingredients.

I've always had that mindset--clean eating = no room for anything else.  I rarely even make home-made banana bread, or home-made brownies, for instance.  I know how to make them delicious and clean, and yet what do I crave (or think I do)?  The store-bought stuff.

Clearly I need to change my mind about food, and about what I really DO want, instead of what I THINK I want, if that makes sense.

I also had to really consider if this was something I wanted to commit to.  I'm not talking, "Oh, for sure, I'll do it...until this event happens, or someone comes into work with cake, or or or...".  If I'm going to do this, I'm going to DO IT.  I need to make a change.  I need to commit to leading the clean life I've been dreaming of these past 3 years.

But will I COMMIT to 100 days?  Will I REALLY commit to 100 days, knowing that it will take me through Christmas?  Knowing that I'm going to have to tell anyone at whose house I may be eating at, that I'm committed to it, knowing that they may take the mickey out of me for it/make me feel like I'm being ridiculous/constantly hear "you only live once" or "just this one thing"?

Really thinking about it, considering what it will mean, I'm saying yes.  Why?  Because I need to do this, I WANT to do this, and this ISN'T about denying myself anything, it's about learning to HAVE EVERYTHING, to have ABUNDANCE, just in a different way.

Yes.  I'm doing this.  I'm doing it starting Monday (because I have events today and tomorrow which are out of my control, and though I will do my best, I won't have time to plan alternatives, and I want to commit 100% to it).

I'm also not rich, so I'm doing it on a budget.  I will be keeping track of my spending each week, and will not go over $80 CAD for the week.  If I'm under, then great, I'll put that money in a wee jar, and save it in case I suddenly run out of something and replacing it would be over budget.  If I don't have the money...well that item doesn't get replaced, and I will live without it until the next week (my weeks will start on Saturday, other than the first week, because that's farmer's market day).

I don't mind saying, this freaks me out a little.  Committing to these 100 days means that I'm committing to doing a pretty darned big overhaul of a lot of my life.  It won't always be easy, but you know what?  It will be SO worth it.  I'll be so much healthier than I am now, will have so much more energy, and just as important, I will have added my experience to others, that proves it CAN be done, and it CAN be done on a budget!

I'm going to blog about it, and be completely honest about all of it--the ups AND the downs, because that's real life, you know?  Not everything is rosy all the time.  It may not always be pretty, but it WILL ALWAYS BE REAL. 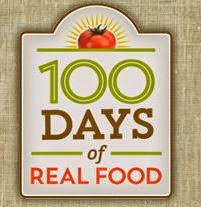