I just read this fantastic article, and I had to share it.  Being healthy is SO much more important than being a certain weight.  I've heard so many people stress and cry about how their body refuses to lose the last 5 lbs--but they were the ones who randomly chose that number, not their bodies!  It's insane what we do to ourselves now...and it has to stop.  No need to cut out food groups, or starve yourself.

The original post with its comments can be found here.  For your convenience I've duplicated the body of the post below.


An Open Apology to All of My Weight Loss Clients

I worked at a popular weight loss company for three years. I loved my job there. I LOVED my clients. I loved making a connection and sharing my knowledge. And I learned a lot about nutrition, about dieting and weight loss and what works and what doesn't. My job was to be a weight loss consultant, and I learned that job very well. I can design a 1,200 calorie meal plan, tell you which activities are most likely to make the number on the scale go down, and how many carbs are in a cup of rice. I can talk the diet game like it's my business... because it was. Volumize with vegetables. Don't go too long in between meals. Start with a bowl of broth-based soup. Are you drinking enough water? Did you exercise enough? Did you exercise too much? Let's look at your food journal.
This is not an anti-weight loss company post (although I could write that too). It's a letter to each and every woman that I unknowingly wronged. My heart is beating a little bit faster as I write this, and so I know this needs to be said. The words have been playing in my head for months. Sometimes it just takes time for me to get up the courage to say the right thing.
So here goes:
Dear Former Weight Loss Clients (you know who you are):
I'm sorry.
I'm sorry because I put you on a 1,200 calorie diet and told you that was healthy. I'm sorry because when you were running 5x a week, I encouraged you to switch from a 1,200 calorie diet 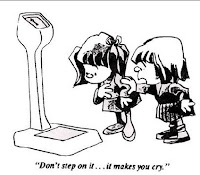