After a slow-go, because of all the ruddy rain we had in May and the beginning of June, or food garden is starting to produce! 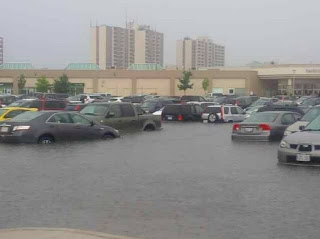 ...well it was...until a WICKED rain storm we had last week.  See all the water in the parking lot to the right?  That image is no guff--all that rain did come down...in AN HOUR.  Yes, an HOUR.  Shoppers took it in stride though, some even took pics of themselves swimming to their cars! LOL

Our baby plants took a bit of a beating too, though not nearly as much as I'd feared.  My sister, whose home the garden is at, was away for the past week, and I wasn't sure what I'd be finding when I went to check on the troops.  Fortunately, though the mescalin mix and assorted leafies were pretty mashed, the rest seemed to be OK.

The second pic below is of the main garden, the day after the storm: 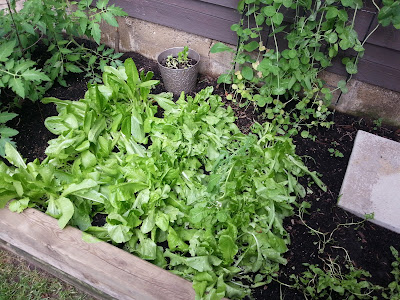 The mescalin mix and salad mix are the ones to the right of that big mass of bright green.  On the left hand side of the mass is romaine lettuce, which seems to have survived pretty well, though it's still a bit traumatized, poor baby.  The sugar snap peas growing up the trellis in the back are pretty happy (though not as happy as I'll be when I can eat them!  MUAHAHAHAHA!), and the tomato plants, wholly PICKLES are they growing!  They'd be bigger I'm sure if there had been more sun, but I'm so proud of them! 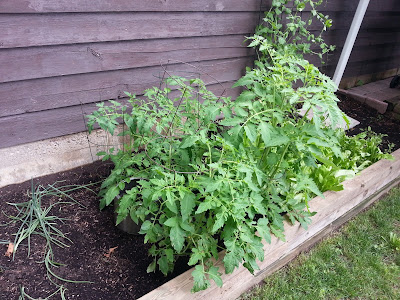 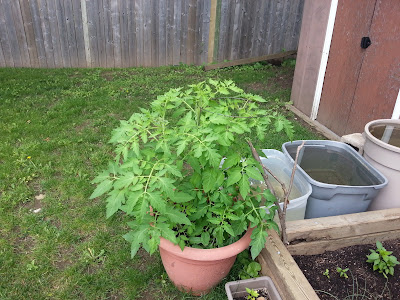 The herbs are starting to bush out too, for the most part. 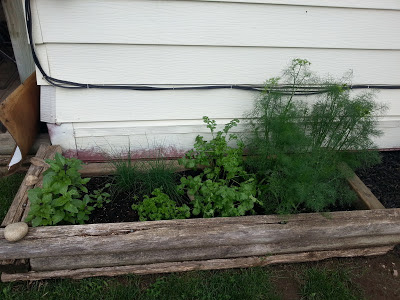 I'm totally geeking out over all of this, especially being a born and raised city girl.  All around my city are other cities, but also vast countryside with farms everywhere, so I do know where food comes from, but being able to grow my own organic produce is BLOODY BRILLIANT!

I picked a lot of the lettuce that didn't fair so well--I figured I'd just juice that, no probs.  I also picked lots of baby romaine, 3 little green onions, and a bunch of the herbs.  LOVE! 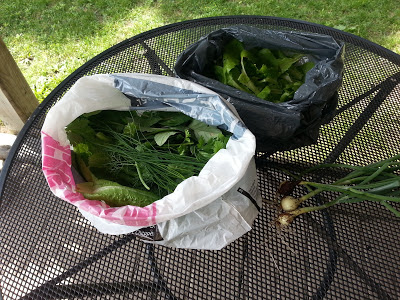 I think I may make some sort of raw taco first.  I'll use a few romaine leaves, the super fresh onions, the chives and the cilantro, and add some veggies which I have in my fridge, plus a squeeze of lemon juice or something.  Maybe I'll marinate some sliced cucumber in a bit of vinegar and the fresh dill. Yum!

One thing I noticed about the herbs, is how much more aromatic, and likely flavourful, they are than the "fresh" herbs I get at the store, or even the farmer's market.  I could literally SMELL the dill while I was picking it!  So dilly!  And the cilantro smelled so fresh and lemony!