Like many people, I love pizza.  So long as it's tasty and doesn't have broccoli on it (LOL) I'm in heaven.  What I'm NOT in heaven about is how HORRIBLE the vast majority of pizzaria places make it.  And let's face it--"pizzaria" is only very loosely applied to most pizza places--what they make isn't anything like what one would find in an actual Italian pizzaria.

For quite some time, I've been looking for a way to make pizza at home, entirely from scratch--right from the crust.  The crust recipe has been the stumbling block, because I don't want to have to spend half my day making the crust, and it had to be a recipe with ingredients that I could actually find!

Then it finally happened!  I found an easy recipe which yields enough pizza to make 2 large thin-crust pizzas, or 8-10 small thin-crust pizzas, which is what I wanted.  Even better, it made small dough balls which would freeze, individually wrapped, and just needed to be thawed out in the fridge overnight and warmed to room temp before it is ready to be rolled out.  So basically get home from work, set it out (covered) on the counter while you change and make a tea or whatever you do every day, and then it's ready!

The REALLY cool thing is that you don't need to pre-bake the crust--just pile on the toppings on the raw crust! 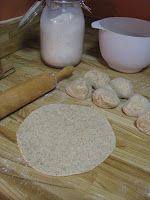 So this is what I did:

I made the clean crust (make sure to allow time for rising per the recipe).  The pic to the right is the recipe divided into single-serving balls.

Be sure to properly flour your rolling surface, otherwise that raw crust is going nowhere after you roll it out! 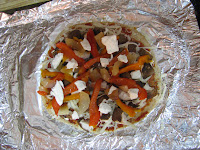 Carefully lift the crust, and place it onto whatever sheet you're going to use to bake it on.  Then, add all the toppings you like.  I used leftover roasted onions, red and yellow peppers, mushrooms, a bit of mozzarella, and some goat cheese.  For the sauce I just used tomato paste (less is more--remember it's condensed) with a sprinkle of oregano and basil, and fresh-ground black pepper.

Then into the pre-heated oven for about 15 minutes, and voila!  Magnifico! 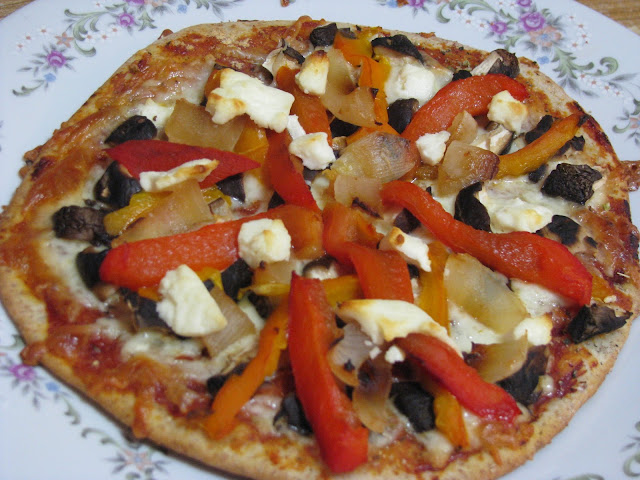