For MONTHS I've been trying to find someone around here which not only sells Nutribullets, but actually have them in stock.  Yes, they're a very hot commodity around here, and I could NOT find any.  I even had my sister and her husband searching for me!

Finally FINALLY I found it at Bed Bath and Beyond.  We found a display...and none for sale.  My sister said, "Maybe they sell it Beyond?" which made me laugh. :)  The salesperson in that section came over to us and offered me to order it in, with the shipping waved since they didn't have any in stock.  HELLO!  Like you have to ask me twice?

So anyway, I got it the beginning of last week, and by golly it was so worth the wait!

I'd really wanted one because I wanted something that could pulverize ingredients the same way that a Vitamix can, without having to pay $500.  That's a lot of money! 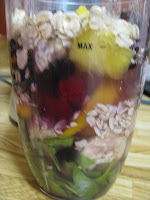 The first smoothie I made was this:

It turned out really well!  The white things in it is raw oatmeal.  I've added oatmeal to my breakfast smoothies before, since it adds not only more nutrients but keeps me fuller longer.  It doesn't change the taste at all, just makes it thicker.  In the Nutribullet it was completely broken down as well. 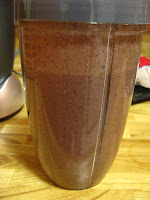 I also added baby spinach as you can see in the pic.  Some of you may think that's a little kinky, but it doesn't change the flavour one iota, and adds a bunch of nutrients.  There's a couple of handfulls in there!

There is also strawberries, pineapple, blueberries--all from frozen because there's no growing season here in the winter--as well as a few cashews, flax seeds, and wheat germ.  It was very tasty, and a nutrition explosion!

The second smoothie I tried to make contained 1 whole carrot in the ingredients.  The flavour was really nice, but I didn't realize how much FIBER is in a big carrot!  It made the smoothie really mealy tasting, and I ended up tossing it--I just couldn't get over the texture.  BLECH.  BUT that was a learning experience--if I want carrots in my smoothies, I'm either going to have to strain them or juice them. :)

I intend to make a lot more than just smoothies with my beloved Nutribullet, so stay tuned!