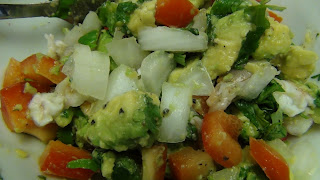 I woke up this morning, and my first thought--after "Is it seriously morning already?"--was, "mmmm...I could go for a sausage breakfast sandwich!"  It was the morning of Sqeaky Clean Day TWO!  I mean sheesh!

Of course I said no!  All I have to do this month is say no to junk and yes to everything else that's out there.  That's not too hard, right?  Right??

So instead for breakfast, I had no-sugar-added ancient grains cereal with a smidge of raw wildflower honey and 1% milk, and a lovely decaf tea.  Good breakfast!

Mid-morning I had a hard boiled egg and a pear.  Then for lunch I had avocado shrimp ceviche (pictured above).  It was GOOD!  Actually, it was DELISH!  And as an afternoon snack I had a Kashi bar.

Right now I'm hungry, which is usually when my resolve is weakest.  I want food NOW!  NOW NOW NOW!  But healthy food isn't always ready in this exact millisecond, so I just have to DEAL WITH IT.

Hey--I have fresh, organic, whole-grain tortillas I bought from the market on Saturday...I have eggs...I have veggies...I have clean hot sauce...  Me thinks I have the makings of a breakfast burrito!  Maravilloso!!

Addiction to junk food seems a bit silly to people who don't suffer from it, but it's a very real affliction.  And since junk- and Franken-food is everywhere, it's also pretty scary.  Imagine being a heroin addict, and having it laying around everywhere, sometimes cheaper than food!

Refined sugars and saturated fat have been found to have the same effect on the brain as heroin.  The dopamine receptors in our brains are fed in much the same way as drug addicts when they get a hit.  And even when they're thinking about it, they still get some of the same feeling--which triggers a craving.

Hmmm...sound familiar?  Ever see a commerical and immediately want what's featured?  Ever hear that there's leftover birthday cake in the kitchen at work, and immediately head (or want to) upstairs, even if you're not hungry?

Strangely, knowing this doesn't make me less motivated to break junk food's hold on me--it's making me MORE committed.  The thought that I could spend my life in a constant battle with my addiction is absolutely HORRIFYING.  It gives me STRENGTH to know that kicking it to the curb once and for all now is so much easier than fighting/clawing my way back, is what keeps me going.

I DON'T WANT TO FIGHT IT FOR MY WHOLE DAMN LIFE!  The time is NOW.  PERIOD.

This is Phase One of my year-long quest to find out just how healthy I can be.  Phase one is a biggie, but I need to do it now, not later.  It will stand in my way the entire time, if I don't overcome it now.

In a small bowl, combine shrimp and most of the citrus juice.  Make sure the bowl is small enough that the juice will completely cover the shimp, because the citrus "cooks" the shrimp.  Allow to sit in the fridge for about 20 minutes.

In a separate bowl, combine the peppers, onion, and cilantro. and remainder of the juice.  Mix.

When the shrimp is pink and white, with no grey bits, it's ready to eat.  Add the pieces of shrimp, discarding the marinating juice, and then the avocado.  Give the salad a quick toss.